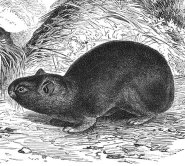 The Alpine Pika (Ochotona alpina) is a species of Pika that is found in the mountains of Russia, Kazakhstan, and Mongolia. The Alpine Pike in general usually weighs in at 5 ounces, and is 7 inches long. It is known for living in cold climates, and only in the mountainous areas of the three countries listed; it has small short legs, round ears, no tail that is visible, and has very sharp curved claws used for foraging and digging. The Alpine Pika feeds mostly on plant stems, and during the summer months when the weather is favorable it will gather food to store during the winter time. Because of the its unique patterned fur, it can spend its time warming on rocks with little threat of a predator spotting it. This behavior is seen most the time, so that additional warmth can be gained as the months grow colder.

Pikas have exceptionally good hearing, and very acute eyesight, and when gathering or sunning, they will emit a warning if a predator is seen. This warning is in the form of a high pitched whistle, which travels far, and is detected by other pika’s excellent hearing. They live mostly in very rocky mountainsides, and use the existing layout to build shelters, but many times if there is no alternative they will dig a burrow to use. Like rabbits, the pika has an unusual and what could be seen as unsavory habit. After eating a meal a pika will excrete a green pellet-like fecal dropping - and then consume it again for the additional nutrition, resulting in a final harder pellet that is disposed of.

The Alpine Pika belongs to the subgenus of Pika and the genus of Ochotona, which is in the family Ochotonidae, and the order of Lagomorpha. Lagomorpha contains within it three known families, with Ochotonidae being the Pikas, Leporidae being rabbits and hares, and one other extinct family of large pikas - which had only one modern survivor that was hunted to extinction in the 1700s. The Alpine Pika usually has a litter of young between 25 to 30 days after pregnancy with five or less young at a time. They are very sensitive to temperature change, and can tolerate cold better than heat - and may be a prime indicator of global warming as few will survive longer than an hour in temperatures above 75 degrees Fahrenheit (23 degrees Celsius).

The behavior involving the foraging and gathering of grasses is interesting, in that the Alpine Pika seems to plan exactly what it needs and how to build a sufficiently warm burrow. When they gather fresh material, they leave it outside to dry out - and when sufficiently dry will move it in to their burrow to create the bedding and food supply for winter, building up a significant supply as pikas are not a hibernating species. They continue to do this until there is no more left, or the temperatures prohibit it in a sudden extreme cold snap. When a Pika leaves its material out to dry, occasionally another will be opportunistic and take advantage of the situation - stealing the dried or drying grass for itself. Then ensuring fight may attract a predator.

Some interesting facts about Alpine Pikas:

The Alpine pika is listed as Least Concern (LR/lc), lowest risk. Does not qualify for a more at risk category. Widespread and abundant taxa are included in this category, on the IUCN Red List of Threatened Species