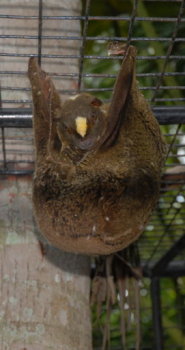 The Philippine Flying Lemur (Cynocephalus volans) lives in (you guessed it) the Philippines, however it is restricted to just a few islands. The Philippine Flying Lemur is a small mammal, measuring around 14-17 inches in length (35-43 centimeters) and weighing only 2.2 to 3.7 pounds (1.1-1.7 kilograms). Although it is called a flying lemur, it cannot actually fly and it is not even a lemur – actual lemurs are found in Madagascar and close islands called the Comoro Islands. The Philippine Flying Lemur has a wide face and head, proportionally small ears, and large eyes, and it also possesses clawed feet, which are webbed for climbing and gliding (not flying). Their tail also provides flight navigation and is of a medium length – their limbs are long and a special membrane is connected between them from front to hind limbs in order to enable their gliding ability.

The Philippine Flying Lemur’s species name is Cynocephalus Volans, and it belongs to the genus Cynocephalus. Cynocephalus belongs to the family Cynocephalidae, which has only one other living genus and species, Galeopterus (Sunda Flying Lemur [which is not a real lemur either]), and one known extinct genus and species, Dermotherium. Cynocephalidae belongs to the order Dermoptera. Dermoptera belongs to the super order Euarchontoglires, and that belongs to the Infraclass Eutheria (placental mammals). In the trees they are not well adapted to climbing; however do sufficiently well to remain in trees their whole lives. This clumsiness can be attributed to the lack of opposable thumbs, and rather than climb in a slow upward motion they hop, grab, and hop again to ascend the tree. The skin between their limbs extends to the largest shape possible when gliding, allowing for maximum surface area, and can allow one to glide 230 feet (70 meters) from tree to tree without loosing too much height.

Primarily nocturnal, the Philippine Flying Lemur is a very shy creature, and although it has sharp teeth, it feeds on plant matter, and fruits. Their incisor teeth are very unique, they are almost like a tiny comb with twenty tines upon each incisor tooth – and as of yet their function remains wholly unknown. They resemble marsupials in their breeding and gestation (pregnancy) in that the baby is born just after 60 days, and it is very tiny and undeveloped – it will be two years before it is ready to venture out on its own. Once born it clings to the mother’s belly, while the mother protects it from harm with her tail, as folding it under also folds some of the membrane for flying. It is unknown at this time if the Philippine Flying Lemur could be the ancestor of a link between Marsupial and Placental mammals.

The International Union for Conservation of Nature and Natural Resources lists the Philippine Flying Lemur as threatened due to habitat loss and human predation. The Philippine Flying Lemur is dependent upon the rain forests of the Philippines and the loss of that habitat is happening at an alarming rate. Due to the long breeding times, and the two year maturation of a baby Philippine Flying Lemur, poaching of even individuals has a dire effect on the population. Their slower repopulation rates hampers recovery, and it could furthermore cause a genetic breakdown should populations continue to decrease, however with that decrease they will be listed as endangered and be given more attention.

The Flying lemur, philippine flying lemur is listed as Vulnerable (VU), considered to be facing a high risk of extinction in the wild, on the IUCN Red List of Threatened Species

Namings for the Philippine flying lemur

A Philippine flying lemur group is called a 'troop'.

Some facts about the
Flying lemur (glider)