Brush-tailed Phascogale - A Bottle Brush for a Tail 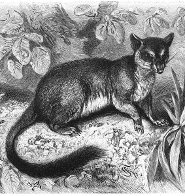 Description
The body, legs, and head of the Brush-tailed Phascogale are covered by a deep grizzled-grey fur, with a pale creamy undercoat. The rat-like head is crowned with large bare pointed ears. The tail, usually as long as the body, ends in a tuft of black hair much like a kitchen bottle brush. The average male is 15.8" (401 mm) long, and weighs 7 ounces (199 grams); the average female is 13.9" (352 mm) long and weighs 4.7 ounces (145 grams).

Habitat
The Brush-tailed Phascogale prefers areas with an annual rainfall over 20" (500 mm), in such regions as open forests, swamps, and rain forests. This marsupial is a very agile climber of trees, and often hangs head down from branches. The Brush-tailed Phascogale nests in tree hollows lined with shredded bark and leaves, often moving to many different hollows over their short lifetimes.

Position in Food Chain
An nocturnal hunter, the Brush-tailed Phascogale eats insects, spiders, beetles, cockroaches, and centipedes, and occasionally a small lizard or bird. When the time comes to mate, around June or July, the male travels long distances to find a female. A male dies almost immediately after mating season is over, around the age of one year.

Females, however, live longer, up to three years, but produce only one litter in their lifetime. Nesting in the hollow of a tree, an expectant female will, within thirty days, bear a litter of seven or eight young, who will spend their first seven weeks in their mother's marsupial pouch. Once the young leave the pouch, they will stay in the nest for five more months, until they are weaned.

Species Vulnerability
Originally, the Brush-tailed Phascogale was well-established throughout Australia. But, because of the destruction of their natural habitat, and continual predation, these marsupials have disappeared from most of Australia. The species is officially listed as having a "Near Threatened" status.

The Brush-tailed phascogale is listed as Near Threatened (LR/nt), is close to qualifying for or is likely to qualify for a threatened category in the near future, on the IUCN Red List of Threatened Species

Some facts about the
Tuan