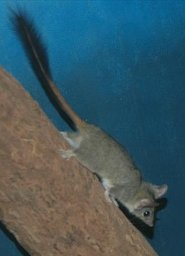 The red-tailed phascogale resembles a smaller, longer-faced chinchilla. It's body is compact, with short legs ending in mostly hairless feet. The bottom of the feet contain pads that help the red-tailed phascogale climb trees. The body has a grey-brown coat with a white belly, chest and legs. Some individuals can appear silvery. The slim reddish tail ends in a black brush. The face has a rose pink nose and pale rings around the large, dark eyes.

Red-tailed phascogales become sexually mature when they are about 12 months old. Mating season is in July. The immune system of males fail during this stressful time, so they usually do not survive to their second year. Females have up to 15 joeys.

Picture of the red-tailed phascogale by Interllectual, licensed under the Creative Commons Attribution-Share Alike 2.0 Generic license.

The Red-tailed phascogale, red-tailed wambenger is listed as Endangered (EN), considered to be facing a very high risk of extinction in the wild, on the IUCN Red List of Threatened Species

Some facts about the
Red-tailed phascogale