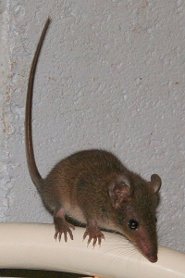 The Brown Antechinus has a body length of 9.5 to 11 cm (3.7 in to 4.3 in) and has a tail length of between 10 to 12 cm (3.9 in to 4.7 in). The antechinus is a brown color along its sides and back with a cream to white underbelly. The ears are small and rounded, set high upon the head and the eyes are small, black orbs located midway between the nose and ears. The Brown Antechinus has five toes on each of its four feet and is an excellent climber.

The antechinus is nocturnal, for the most part, and is arboreal, meaning that it lives primarily in trees. The females of the species build large, communal nests which are shared by many of the same species. Interestingly, the males die after their very first two-week breeding season due to the stress of the period and the exhaustion of mating.listofcountriesoftheworld.com/as-animals.html" title="" rel='external'>Australia. The antechinus is almost exclusively found in wooded habitats. The diet of the antechinus is comprised of insects: beetles, spiders and cockroaches, though the antechinus will eat almost anything it can find if insects are scarce.

The conservation status of the Brown Antechinus is labeled as 'least concern'. This means that the antechinus is at the very bottom of the list when it comes to endangered species; not being at all threatened. The antechinus has natural predators: snakes, lizards and predatory birds, but is not preyed upon by man.

The Brown antechinus is listed as Least Concern (LR/lc), lowest risk. Does not qualify for a more at risk category. Widespread and abundant taxa are included in this category, on the IUCN Red List of Threatened Species

Some facts about the
Brown antechinus