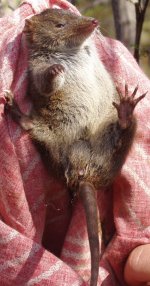 Dusky Antechinus (Antechinus swainsonii) is a carnivorous marsupial belonging to the Dasyuridae family. It is also called the Swainson's Antechinus. It occurs in the Australian mainland's southeast coastal regions from southwestern Victoria to southeastern Queensland and can be found in the island of Tasmania too. They nest either in ground vegetation or thick litter of leaves on forest floor or in a hollowed log in areas of sclerophyll forests and rainforests. It is a terrestial marsupial.

Although it is just of typical size, the dusky antechinus is already the largest among the species of antechinus. The body of this marsupial has a length of around 121 centimeters. The average weight for males is 65 grams, and sexual dimorphism is present as females have an average of only 41 grams. It looks like a shrew or a mouse, complete with long tail. The dusky anthechinus has two forms, a pale one and a darker form. However, both forms with fur color ranging from black to dark grey are still visibly darker compared to its distant relatives. The color of this animal becomes even darker on its feet, sides, and anal area.

Like many marsupials, this animal is a solitary nocturnal creature. It spends the day alone in its nest and hunts for food at night. As a carnivore, it devours invertebrates like insects and worms with an intense appetite and also hunts small birds, mice, skinks and lizards.

When it eats a bony meal like a mouse or a bird, it has a strange habit of neatly turning the skin of its prey inside out in the process of devouring it. Its diet is supplemented by nectar, flowers, and some vegetable matter.

The dusky antechinus, like its swamp antechinus relative, has a distinguished copulation biology that happens for a short period during winter. The testosterone level of the male rises, and this drives him into a sexual frenzy. As a matter of fact, it competes on a very high intensity level with other males for female partners. In three weeks time, due mainly to high stress brought by physiological changes during copulation, all males die. After a gestation of four weeks, between six and eight babies are born to the females.

The Dusky antechinus is listed as Least Concern (LR/lc), lowest risk. Does not qualify for a more at risk category. Widespread and abundant taxa are included in this category, on the IUCN Red List of Threatened Species

Some facts about the
Dusky antechinus