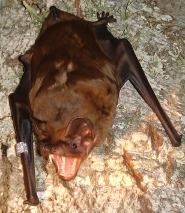 The Giant Noctule (Nyctalus lasiopterus) is a rare, flying mammal also known as the Greater Noctule Bat. They are found scattered around the Iberian Peninsula in southwest Europe, the Balkans in southeastern Europe, and the Ural region in western Russia. They have also been spotted in Morocco and Libya in northern Africa, as well as in Turkey, northern Iran, and Kazakhstan.

These bats weigh approximately 1.7 ounces (50 grams), and possess a wingspan of up to 23 inches (60 cm). Despite their small stature, they are surprisingly predatory, and small passerine birds who migrate at night are in danger. Within the past decade, it has been found that Giant Noctules chase, catch, and eat fowl prey while in flight.

They use echolocation to navigate, forage, and hunt in the dark. They echolocate within specific frequency ranges that are above the hearing range of birds, which gives the bats the upper hand during the hunt. They fly higher up in the air, upwards of .3 miles (500 meters) to find prey, and researchers believe that spring and autumn, peak months for bird migration, are prime hunting seasons for these predatory bats.

During peak migration periods, the diet of Giant Noctules consists largely of passerine, or small perching birds. These birds are caught and eaten on the wing, in mid-air during flight, rather than from nests or perches.npr.org/templates/story/story.php?storyId=9605365" title="" rel='external'>this article. Insects are also an important source of food. They have a few natural predators in the wild including owls, which can capture bats during flight, just as Giant Noctules capture passerine birds.

They are native to certain countries in Europe, North Africa, and West Asia including Spain, France, Bulgaria, Romania, and the Ukraine. Their natural habitat consists of mixed and deciduous forests, as well as wooded river valleys. The Giant Noctules are highly dependent on mature woodlands containing old trees. They use hollow trees to roost in summertime, and rock crevices during the winter months, which are a time of hibernation. Old buildings are also common roosting sites.

Giant Noctules are considered to be a near threatened animal. Their population appears to be decreasing due largely to deforestation. In particular, the loss of old trees, which are crucial to supporting bat colonies, and the disturbance of other roosting sites, such as old buildings, threaten these small, remarkable creatures' survival.

The Giant noctule is listed as Near Threatened (LR/nt), is close to qualifying for or is likely to qualify for a threatened category in the near future, on the IUCN Red List of Threatened Species