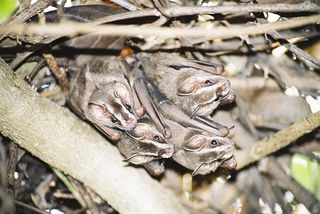 The Tent-maiking bat is listed as Least Concern (LR/lc), lowest risk. Does not qualify for a more at risk category. Widespread and abundant taxa are included in this category, on the IUCN Red List of Threatened Species

Namings for the tentmaking bat

Facts about the tent-making bat

These "tent-making" bats are small fruit-eaters that chew across the large leaves to cause the sides to droop down in the form of a tent.

Unlike most bats, which make no nest or shelter of any sort, the tent-making bat is known to cut a row of small holes in a palm frond so the edges droop, forming a sort of tent under which the bat hangs.

Tent-making bats are amazing in that they can make their own protected perch. (Full text)

What is less excusable are errors of illustration: a white tent-making bat is shown perched on a leaf even though it should hang underneath. (Full text)

Honduran tent making bats are little white fuzzy ones, with cute little faces, they will chew a leafs spine & actually make a little tent for themselves. (Full text)