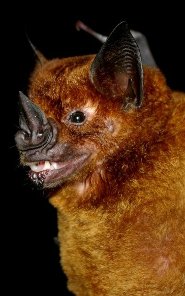 The greater-spear nosed bat (Phyllostomus hastatus) has a face straight out of a low-budget horror movie. This scary-looking creature is far from harmful to people. Without this species of bat, some crops cannot get pollinated. This bat likes drinking flower nectar. When they hover over a flower to lap nectar, their bodies collect pollen, which is then transferred to other flowers of the same species. The greater spear-nosed bat also eats night-flying insect pests.

This is not an endangered species of bat, but soon could become endangered if more of their habitat is destroyed. Some bats have been found roosting in South American homes, but many homeowners chase the bats out. They are still found in forests and near bodies of water in Honduras, Colombia, Bolivia, Guyana, Panama, Paraguay, Venezuela and Trinidad and Tobago. Adults are killed by people, but baby bats (pups) can be killed by female bats that live outside of the pups’ social group.

Adult greater spear-nosed bats have a light brown furry head and body with a pale belly. They have small, round, dark eyes, large pointed ears and a black hairless nose that is shaped like a spear-tip. The profile has a wide forehead tapering to a slightly pointed nose. The lips are black. The lower lip has a V-shaped notch in the center and is covered in warts. Their tails are short and difficult to see. The wings are hairless, black and leathery.

Males and females look alike, except that makes have a larger throat pouch located over the breastbone. Adults grow to a body length range of 3.9 to 5.1 inches (about 100 to 130 millimeters) and a wingspan that grows up to 17.9 inches (455 millimeters.) Adults weigh an average of 2.9 ounces (89 grams.)

Greater spear-nosed bats spend the nights searching for their food, which consists mostly of fruit like bananas, flower nectar and pollen. Females also eat insects when they are pregnant and nursing, but it is unclear if males also eat insects. The huge ears and forehead work as a sonar. The bat sends out a series of clicks and navigates by hearing the echoes of these clicks.

The breeding season begins in October and lasts until February. Males have harems of up to 30 females. Many harems may share a roosting space but can squabble among each other. Females will take care of the pups of other females in their harem, but will attack pups not of the harem. After a gestation of 120 days, females give birth to a single pup. Pups often fall from the roost and a female has to pick the pup up or it will soon die. With luck, a greater spear-nosed bat can live to be 18 years old.

Picture of the greater spear-nosed bat by Felineora, licensed under the Creative Commons Attribution 3.0 Unported license.

The Greater spear-nosed bat is listed as Least Concern (LR/lc), lowest risk. Does not qualify for a more at risk category. Widespread and abundant taxa are included in this category, on the IUCN Red List of Threatened Species

Namings for the greater spearnosed bat

Some facts about the
Greater spear-nosed bat