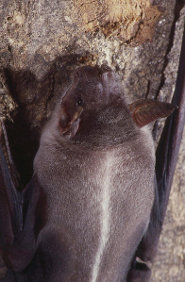 The Greater bulldog bat (Noctilio leporinus) is nature's fisherman. Using its amazing echolocation ability, the bat finds fish by detecting ripples in the water made by those fish. Once the bat locates the fish, it dives down, catching the fish in the ample pouch located between its legs, holding on to the catch with its claws. The Greater bulldog bat is also known for emitting a high frequency sound not often heard from bats of this size.

The Greater bulldog bat is one of the larger bats, with a combined length of about 12.7 cm. Males weigh, on average about 67 grams while the smaller, lighter females weigh in at about 56 grams. The wingspan of the bat extends one meter, tip to tip, though the majority of this wingspan is located in the third digit. Males are easily identified by bright orange fur along the back; the female having dull gray fur along the same area.
This bat can be found in a range that extends from western and eastern Mexico south to the northern area of Argentina. Most of the Caribbean islands also can claim to be home to the Greater bulldog bat. While the bat lives in a wide range, it is sparsely populated as its habitat requirements are fairly strict. Non-arid lowlands and major river basins are the preferred habitats of the animal.

The familial structure of the bats is particularly interesting in that the female of the species will remain together in the same location for several years while males will only stay in one area for two reproductive cycles. Females will also hunt and forage in their social group while the males forage on their own in areas separate from the females. During the wet season, the bats hunt for and feed on moths and beetles while, during the dry season, their diet consists of fish, crabs and scorpions. When water ripples made by fish are scarce, the bat will skim along the water, dragging his feet (or raking) for up to 10 meters, trying to catch fish. The areas it rakes are ones in which it has previously had success in hunting.

The Greater bulldog bat is not endangered but is threatened by deforestation like many other species of animal in the region. Those bats that live in Belize are threatened by water pollution and changing water levels that have restricted their habitat range. In Guatemala, fish farmers kill the Greater bulldog bats to essentially stop the competition. Happily, for now, the bats are still thriving and should do so for some time to come.

The Greater bulldog bat is listed as Least Concern (LR/lc), lowest risk. Does not qualify for a more at risk category. Widespread and abundant taxa are included in this category, on the IUCN Red List of Threatened Species

Namings for the greater bulldog bat

Some facts about the
Greater bulldog bat