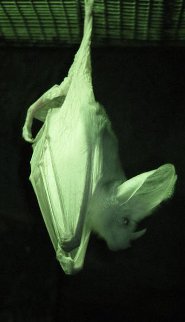 The Australian False Vampire Bat (Macroderma gigas) or ghost bat is mostly prevalent in Australia. Since the membrane of their wings is very thin, they look like ghosts in the night. The color of their fur on the back is grey and it is white or grey from its underside. The average length of a ghost bat is 10-13 cm (3.9-5.1 inches) and it does not have a tail. Males are larger than females. The ghost bat has very large ears which enable it to hear long distance sounds of the foot steps of small animals on which it feeds. Its sharp teeth help it in attacking its prey.

The ghost bat can be found in Queensland, Australia, and it is also widespread in Asian and African continents.

The Australian false vampire bat comes in the category of largest bats. This bat is the only carnivorous bat found in Australia. They feed on large insects like cockroaches and small vertebrates, such as frogs, reptiles, lizards, small mammals, birds, and even small bat species.

Hanging from a branch, the Australian false vampire bats generally wait for their prey to pass on the ground. As soon as they see their prey, they come down, roll their prey within their wings and bite at its neck and head with their sharp teeth to kill the prey. Small animals also become their prey while they are simply fighting amongst each other. The diet of a ghost bat is quite good and it consumes almost the whole of its prey including its teeth, bones, small feathers, fur, flesh, and the skeletons of insects.

In winters, the Australian false vampire bat moves to warmer places (Northern Australia) and when the weather becomes hot, it returns to cooler southern regions. In order to capture its prey, the ghost bat uses echolocation, but it seems that it catches its prey with its extremely sensitive vision and hearing power. These Australian bats like to roost alone. There are not more than 100 individuals in one group. During most of the breeding season, the females assemble in colonies but males prefer to stay in their own colonies. In some cases, males have been found with females as well but this is a very rare case.

The Australian false vampire bats generally mate in April and May and gestate for about three months. The females bear a single offspring. Mothers stay with their young ones and also fly with them to forage (search) for food during the first several weeks of life. Both sexes reach reproductive maturity at about their second year of life.

The Australian false vampire bat, ghost bat is listed as Vulnerable (VU), considered to be facing a high risk of extinction in the wild, on the IUCN Red List of Threatened Species

Some facts about the
Australian false vampire bat