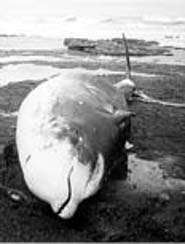 The Hector's beaked whale (Mesoplodon hectori) is less well known than many of its cetacean cousins, and is a relatively unique specimen within the world of whales and dolphins. While the presence of the beak may draw more comparisons to the latter, genetically and functionally speaking it belongs among the ranks of the former. The Hector's beaked whale is incredibly rare, and thus comparatively little is known about it. However, it stands as one of the ocean's most fascinating creatures.

The smallest of the beaked whales, these oceanic mammals generally come in at around 4.2 meters (13.8 ft), and weigh about 1 tonne, or 2,204 lbs, in size closer to a Bottlenose dolphin than most whale species. Its most prominent physical characteristic is the beak which it shares with other members of its genus.

Generally, the Hector's beaked whale prefers a temperate climate. Many have been recorded around New Zealand, but observations have placed them near Tasmania, South Africa, and the southern tip of South America.

What separates the beaked whales from other cetacean species is their method of consuming their prey. While larger whales have baleen and eat mostly plankton, and killer whales and dolphins use more traditional hunting methods, the beaked whales hunt by suction. Their primary prey consists of fish and squid hunted in deep water.

Little is known about the Hector's beaked whale. Until recently, no specimens had ever been properly described; the only ones recorded were in fact Perrin's beaked whales, a similar species. As such, little is known about how this species breeds, how it behaves socially, and what its challenges are within its environment. Its bizarre capacity for suction remains a fascination for scientists, who hope to unlock its mysteries someday.

The Hector's beaked whale, skew-beaked whale is listed as Data Deficient (DD), inadequate information to make a direct, or indirect, assessment of its risk of extinction, on the IUCN Red List of Threatened Species

Namings for the Hector

A young / baby of a Hector is called a 'calf'. The females are called 'cow' and males 'bull'. A Hector group is called a 'gam, pod or herd'.