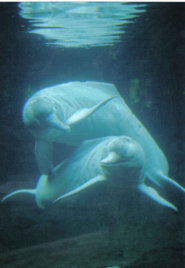 The Amazon river dolphin (Inia geoffrensis) was first officially described by Henri Marie Ducrotay de Blainville in the early 19th Century and was given the scientific name Inia geoffrensis. However, it is commonly referred to as simply the boto. This species exhibits clear sexual dimorphism with adult males reaching lengths of nearly 2.5 meters (8.2 feet) and weighing up to 185 kilograms (407lb). Females are rarely found to be longer than 2.15 meters (7 feet) and typically weigh around 40 kilograms (88lb) less than their male counterparts.

Another common name for the boto is the pink dolphin. However, pink coloration is generally only present to any significant degree in males of the species, and is the result of scar tissue formation. Competition between males for the possession of females is intense, leading to battles in which both competitors are commonly wounded. Such fierce competition between males may explain why females with young calves tend to avoid the deep freshwater territories of males, preferring the shallower flood plains. In fact, contact between females and males is largely confined to the mating season in late October.

Botos are the largest of the five species of river dolphin and are native to Brazil, Bolivia, Colombia, Ecuador, Peru and Venezuela. In much of its territory the Amazon river dolphin is sympatric with the Tucuxi, however, the two are easily distinguishable. The Tucuxi is similar in appearance to the perhaps more familiar bottle-nosed dolphin. The boto, on the other hand, has an elongated jaw filled with up to 30 specialised teeth for catching and crushing fish. Jaw elongation is thought to have evolved in response to the unique set of selective pressures that accompany a piscivorous diet. Intriguingly, similar adaptations can be seen to have evolved convergently in many fish-eating reptiles, including gharials and the long extinct Ichthyosaurs.

The predatory capabilities of the Amazon dolphin are further improved by its unfused neck vertebrae, which allow the cranium a 180 degree arc of movement. This means that, unlike many other aquatic predators, the boto is not limited to prey directly in front of it. It is thought, due to the murky waters they inhabit, that botos are heavily dependent on echolocation for finding fish. There is also some suggestion that these dolphins can stun potential prey using bursts of sound waves produced by the melon organ, a conspicuous swelling found on their foreheads. It is worth noting that as well as fish, botos eat crustaceans such as crabs, and have even been known to prey upon turtles. This presents the problem of breaking through tough shells; however, Amazon river dolphins have evolved extraordinarily strong jaws for precisely that purpose.

Due to their largely solitary lifestyles and reclusive nature, little more is known about Amazon river dolphins. With their conservation status currently listed as vulnerable, if we are ever to learn more about these fascinating fresh water dolphins, it really will be a race against the clock.

The Amazon river dolphin, boto, boutu, pink river dolphin is listed as Vulnerable (VU), considered to be facing a high risk of extinction in the wild, on the IUCN Red List of Threatened Species

Some facts about the
Amazon dolphin