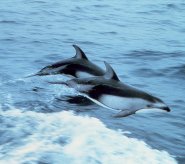 The Pacific white-sided dolphin or "lag" (Lagenorhynchus obliquidens) is a familiar sight to boaters from California to Korea. They regularly leap out of the water and ride the slipstream of boats. Sometimes they leap high and then flop on the water on their sides, as if purposefully making the largest possible splash that they can. Their intense curiosity about boats makes it difficult for scientists to get an accurate number about how many are left in the wild. Pacific white-sided dolphins tend to and from the same boat. Keeping track of which individual dolphin has already investigated a boat is difficult, since the dolphins look alike.

Most Pacific white-sided dolphins migrate to colder Artic waters off of Russia, Canada and Alaska in the summer and then heads to tropical waters such as Japan or Korea for the winter. But some pods or family groups stay in one area year-round, off the coast of Baja, California and do not seem to mind the winter migrants. There may also be a permanent population in Japan. These Japanese dolphins are much lighter in color than the migrants.

Pacific white-sided dolphins are considered small, averaging a mere 7 to 8 feet (2.1 to 2.4 meters) long and weighing in around 300 pounds (150 kg.) Newborn calves average 31 to 37 inches (80 to 95 cm.) They have a much shorter and more bulbous head than the more familiar bottlenose dolphin.

They are spectacularly colored with swirls of black, dark grey and silvery grey. Darker swirls are on the back, around the eyes and on the tip of the beak or nose. The dorsal fin is mostly pale grey but edged in a sharply contrasting black or charcoal-grey. Dolphins often rest at the surface of the water where some of their back may be seen. The Pacific white-sided dolphin has a bright horizontal stripe on both sides of its dark body. The belly and underside of the tail and flippers are white.

Pacific white-sided dolphins seem to delight in each other’s company. Pods of 100 animals are more have been reported, even in the twenty-first century. They also seem curious about other species of dolphins and are friendly with the northern right-whale dolphin (Lagenorhynchus borealis.) Small groups of friends of family members may split off to hunt, but these small groups soon reassemble into huge pods.

All dolphins are carnivorous. They have rarely been observed feeding, leading some scientists to believe they feed at night and spend the daylight hours socializing, playing and snoozing. They eat squid, salmon, herring, sardines, hake, cod and shrimp. They are thought to be prey for large sharks and killer whales but their main predators are humans. Although many countries ban whaling, Pacific white-sided dolphins are killed by the thousands by both Japanese fisherman and accidentally in nets intended for other species such as cod and squid.

With luck, wild Pacific white-sided dolphins can live up to 46. This species has done well in captivity, but needs a huge aquarium in order to remain healthy. Just how many remain in the wild is unknown, although they are currently not listed as an endangered species. However, dolphin meat keeps appearing in black markets, especially in Asia where it is considered a delicacy.

But water pollution is an even bigger threat to the Pacific white-sided dolphin than fisherman. Tests done on beached dolphins on California showed that their bodies contained abnormally high levels of the pesticide DDT and polychlorinated biphenyls (PCBs) used in coolants for machines.

The Pacific white-sided dolphin is listed as Least Concern (LR/lc), lowest risk. Does not qualify for a more at risk category. Widespread and abundant taxa are included in this category, on the IUCN Red List of Threatened Species

Namings for the Pacific whitesided dolphin

Some facts about the
Pacific white-sided dolphin