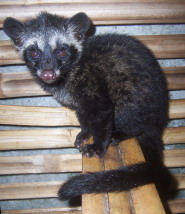 The Asian Palm Civet (Paradoxurus hermaphroditus), also called 'Common Palm Civet' or the 'Toddy Cat' can be found as far west as Kashmir and as far east as the Philippines, from Southern China to the Sundas (and its islands). Its habitat is the tropical forest.

Asian Palm Civets feed only at night, and it is believed that its fear of predators during daytime is the principal reason for its nocturnal attitudes. They retire to their shelters just before dawn arrives. These civets have the reputation to choose the tallest trees they can find. Their organization and activity habits are determined by the availability/surplus of food and again, the activities of their feared predators (and I do not only mean humans). The Asian Palm Civet is arboreal, and when feeding in the same area, they use the same trees to rest in.

These civets are basically frugivorous, that means, they survive on pulpy fruits, berries and even palms (of course, as their name implies). Eggs, reptiles and insects however, are also on the menu.

The Asian Palm Civet also, every once in a while, feed on the fruits of coffee trees, and how do they do this? More on that later... The ears are just small, a bit pointed, and so is the nose's structure. Coat is gray to brown, with guard hair all over. Nocturnal in nature, this civet hunts by itself. It is an outstanding climber and spends most of the time up in the trees...oh, another thing that you might like to know. Its sap is used by some people to make a liquor kind called toddy, giving this civet its other monicker.

Interesting fact: Coffee seeds make their way (in whole) through the digestive path of this civet, then it is collected by people to be used in coffee, and this is no ordinary coffee. This coffee is in high-demand for its unique flavor and is very expensive.

Picture of the Asian Palm Civet by W. Djatmiko, licensed under GFDL

The Asian palm civet, common palm civet, toddy cat is listed as Least Concern (LR/lc), lowest risk. Does not qualify for a more at risk category. Widespread and abundant taxa are included in this category, on the IUCN Red List of Threatened Species

Some facts about the
Common palm civet