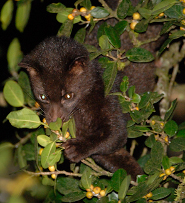 Jerdon's palm civet (paradoxurus jerdoni) is also commonly called the brown palm civet. This mammal ranges from 17 to 28 inches (43 to 71cm) in length, excluding its long tail, and weighs in at approximately 3 to 10 pounds (1.4 to 4.5kg). The Jerdon's palm civet makes its home in the southwest rain forests of India, which include the Western Ghats and Karnataka regions. The brown palm civet is a nocturnal and arboreal mammal which has a general appearance of a cat body with a long extended muzzle similar to that of an otter.

These mammals are omnivorous, with a diet that consists of fruit, eggs, insects, fish, birds and roots. The Jerdon's palm civet hunts to locate its prey, but it is mainly frugivorous focusing on eating from more than 40 rain forest trees and fruits. The civet's favorite fruit is the coffee "berry". Civets give birth to young in the early portion of the rainy season. A Jerdon's palm civet typically litter is between 2 and 4 young. The gestation period is between 60 and 70 days.

The Jerdon's palm civets are classified as vulnerable by the IUCN Red List of Threatened Species. They face a high risk of extinction in the wild due to poachers as well as the destruction of their habitat. Hunting has become increasingly easier since their habitat is being destroyed and they are forced to survive in more open areas on newly developed coffee, tea, teak, and eucalyptus plantations. Mining activities are also destroying the canopies that the Jerdon's palm civet calls. These factors have taken a significant toll on the Jerdon's palm civet's population.

The Brown palm civet, jerdon's palm civet is listed as Vulnerable (VU), considered to be facing a high risk of extinction in the wild, on the IUCN Red List of Threatened Species