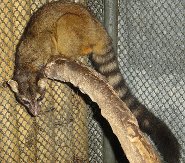 The Cacomistle (Bassariscus sumichrasti) is a species within the Order Carnivora, which means it is related to both Cats, and Dogs, along with many other animals. Their binomial name is Bassariscus sumichrasti, and they are found in Mexico, Panama, and Costa Rica, and they are dependent upon the forests for their livelihood, and are at a greater risk that other adaptable species in the face of deforestation. Their name in the Nahuatl language actually means half-cat, and can be confused with its relative the Ringtailed Cat (Bassariscus astutus) which is found in Mexico and the Southwestern United States. They are usually around 15 to 18 inches in length (38-47cm) and have a tail that is 15 to 20 inches in length (39-53cm). The Cacomistle does look very similar to the Ringtailed Cat; however they can be differentiated by their more pointed ears, their non-retractable claws, along with their naked soles, a significantly longer tail, and the lower ridges on their molars. The coloration of their pelage is a grayish to somewhat brownish gray, and their tail – similar to the Ringtailed Cat – has rings of black.

The current population trend of the Cacomistle is unknown, however it is heavily dependent upon its environment and, with ever increasing rates of habitat loss its future fate is uncertain. They are a solitary mammal, and they usually have a nest or den built into a tree to facilitate the birth of their young. A single solitary offspring is the usual for the Cacomistle, and it takes around 60 days for gestation, followed by being able to eat solid food after seven weeks. By three months it will be weaned and nearly ready to go off on its own. The Cacomistle is a nocturnal species, which means it is active at night and sleeps during the day, additionally it is arboreal, which means it lives in the trees for most of its life. They are omnivorous and will eat a variety of food that they can readily grab, such as fruits, small mammals, insects, eggs, lizards, and frogs. They inhabit the wet tropical evergreen forests and mountain woodlands, and live in the mid and upper altitude of the tropical canopy in those forests. However during some seasons they will wander into drier forests for food and shelter.

Cacomistles are sometimes kept as pets, and similar to the Ringtail it is possible to tame, but not exactly domesticate the Cacomistle. Their cousin the Ringtail was kept by miners and would rid their cabins of vermin like mice.

The Central american cacomistle is listed as Near Threatened (LR/nt), is close to qualifying for or is likely to qualify for a threatened category in the near future, on the IUCN Red List of Threatened Species

Some facts about the
Cacomistle