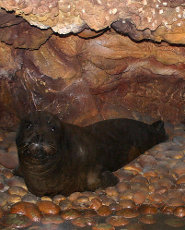 The Mediterranean Monk Seal (Monachus monachus), belongs to the Phocidae family. There are only 400 to 450 individuals of this world's rarest pinniped creature that are found to exist today. This is one of the most endangered species in the entire world of mammals. At present, it is found in the Eastern Atlantic Ocean, the Mediterranean Sea, and also near the Tropic of Cancer.

The Mediterranean monk seal is around 31.49 inches (80 cm) in length at birth and reaches 94.48 inches (2.40 m) after maturity. A mature seal weighs up to around 705.46 lb (320 kg) and females are slightly smaller than their counterparts. At birth, pups have a black natal coat with a white patch underside. This patch helps in their recognition throughout their life. The actual lifespan is not known yet but it is thought that they can survive up to 20 to 25 years of age. A female becomes sexually mature by the age of 4 years.

The Mediterranean monk seal gives birth to its young ones in undersea caves which are not easily accessible although historical descriptions show that till the eighteenth century, the monk seal used to give birth on open beaches. The coat of males is black and they are close to white from underside. Females have a dark gray or brown coat and the color of their belly is on the paler side. In the pinniped family, the monk seal has the shortest hair on its coat. Monk seals have 16 teeth in both their jaws. Their short, broad, and flat snout has long nostrils facing upwards. It has relatively short flippers with small and thin claws.

There is very little knowledge available about the reproduction system of monk seals. It is believed that they are polygynous creatures. Although the birth takes place all round the year and there is no particular time for breeding, October and November are thought to be the peak seasons for reproduction. The pup survival rate is very low with just 50% chances of an individual's survival. Severe storms, high tides, and swollen seas are the main reasons for their high mortality rate. Only 29% of pups that take birth during the cold season from September to January manage to survive. Their survival rate is 71% during rest of the year.

Their main diet includes eels, fish, octopus, squid, and mollusks and they eat more than 3 kg of food per day. Wide open seas are the preferable hunting grounds for these seals, since in wide open spaces, their speed increases considerably. In search of food, they can sometimes, even lift slabs of big rocks.

Previously, the monk seals used to give birth, congregate, or seek refuge on open beaches but recently they have been forced to take shelter in the sea caves which are difficult to reach. Increase in human population, tourism, and industry are the main reasons for the destruction of their habitat.

The Mediterranean monk seal is listed as Critically Endangered (CR), facing an extremely high risk of extinction in the wild, on the IUCN Red List of Threatened Species

Namings for the Mediterranean monk seal

Some facts about the
Mediterranean monk seal