The Southern Elephant Seal-A Face Only a Mother Could Love! 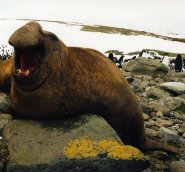 The Southern elephant seal (Mirounga leonina) has the unfortunate distinction of being the fattest mammal in the carnivore family. But with an average size of 880 to 1,980 pounds (400 to 900 kg), nobody is making fun of this strange-looking animal, at least not to its odd face. And that’s the smaller of the species; the males typically weigh approximately 4,847-8,800 pounds (2,200 to 4,000 kg.) Stretched out, the Southern elephant seal averages 8 to 16.5 feet long (2.6 m to 5 m.) But its size is not the reason for his name. It’s that big elephant-like proboscis hanging off its face that earned it that moniker.

They are born cute and fuzzy, however, with a thick black fur to keep them warm and cozy. The pups, when fully weaned, spend their days hanging out in a type of "nursery" with other pups until their fur diminishes and they are on their way to adulthood. During that time, they enter the water and learn to swim, never venturing too far from the other seal pups until it’s ready to face life alone. Southern elephant seals live in groups while on land, but hunt individually. It takes the prize for its ability to dive deeper, longer and faster than other species of seals, surpassing even whales and dolphins with its ability to stay under water for long periods and dive to depths of 5,000 feet.

This strange and unusual animal makes its home in several geographical locations. It has been known to come ashore in Antarctica but their true home is in the Southern hemisphere where it hunts in the waters of the Falkland Islands, Argentina and the Indian Ocean. Colonies are also found in the islands of the Pacific Ocean south of New Zealand and Tasmania. But the largest concentration of Southern elephant seals, over half of the entire population, is found in South Georgia. Their habitat, when not in the ocean, is the rocky and sandy beaches where it mates and gives birth.

The Southern elephant seal has few predators. The orca and the great white shark, in addition to humans, are its only enemies. Hunted nearly to extinction in the early 1900s, the population is now relatively stable due to strict hunting regulations. It is somewhat threatened, however, as it competes with commercial fishing and other animals for the fish and squid on which they prey.

Picture of the southern elephant seal by B.navez, licensed under GFDL

The South atlantic elephant-seal, southern elephant-seal is listed as Least Concern (LR/lc), lowest risk. Does not qualify for a more at risk category. Widespread and abundant taxa are included in this category, on the IUCN Red List of Threatened Species

Namings for the southern elephant seal

Some facts about the
Southern elephant seal