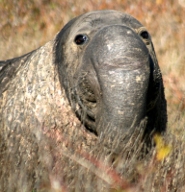 The male Northern elephant seal (Mirounga angustirostris), is an incredibly strong animal that dives deep, migrates far and has bloody battles to win the harems. These harems can be from 30 to 100 females and the winning male may have over 500 pups in his lifetime.

Named elephant seals because of their long elephant-like noses, the snout is used during breeding season for territorial defense. It is nearly a foot (33 cm) long when it is relaxed, and when it is inflated it is used to make very loud roars to challenge other males. These true seals, Phocidae, breed, give birth and molt off the coast of California and northern Mexico mainly on offshore islands. Males travel as far north as the Gulf of Alaska and the Aleutian Islands to find food, but the females feed further south and have been seen in Hawaii. They migrate twice a year and are the only mammals that migrate such great distances.

Northern elephant seals molt annually. It is called a "radical molt", because the skin comes off with the fur in large sheets. They congregate onshore in summer and molt at different times, starting with the babies in March and ending with the males in July.

They feed in deep water on squid, pelagic red crabs, Pacific whiting, skates and also small sharks and rays. They remain under water for long periods, averaging 21 minutes for males and 17 minutes for females. From wounds and scars found on their bodies it is clear they are attacked by orcas and large sharks, particularly the great white shark. This is a significant cause of mortality in baby elephant seals.

The Northern elephant seal is protected in the US and Mexico from human exploitation. It almost became extinct in the late 1800s because it was hunted for its blubber, but legal protection allowed them to repopulate and they made the fastest comeback ever seen in any mammal. Currently, the population is estimated at over 150,000, approximately 84,000 in California and 35,000 in Mexico. Today, it is classified as Least Concern (LC) on the International Union for the Conservation of Nature and Natural Resources (IUCN) Red List.

Picture of the male Northern elephant seal by Mila Zinkova, licensed under GFDL

The Northern elephant seal is listed as Least Concern (LR/lc), lowest risk. Does not qualify for a more at risk category. Widespread and abundant taxa are included in this category, on the IUCN Red List of Threatened Species

Namings for the northern elephant seal

Some facts about the
Northern elephant seal