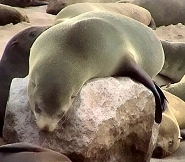 South African fur seals can be found in large groups on rocky or sandy beaches, but they tend to be very independent when traveling. They typically pick rocky islands as their breeding sites in early November. The females are very particular when choosing their mates, basing their decision on how much territory the male candidate claims as his. When males arrive at the breeding site, they fight for territory to impress the females. Pups are born after a 12 month long gestation period. They are weaned over a period of another 12 months with females reaching sexual maturity at 3-4 years and males at 4-5 years.

Even though South African Fur Seal can seem intimidating because of their size, they are remarkably friendly animals. They feel very comfortable in water and even enjoy swimming along with divers. This gives people a great opportunity to bond with these gentle giants. When approached by people on shore, they can get a bit spooked. However, they will not attack. Their main source of food is fish, sometimes crustaceans, or even birds.

South African seals are protected in Australia by the Environment Protection and Biodiversity Conservation Act, passed in 1999, and in Africa by the Sea Birds and Seals Protection Act of 1973. Their greatest threats are great white sharks and orca.

The Afro-australian fur seal, brown fur seal, cape fur seal, south african fur seal is listed as Least Concern (LR/lc), lowest risk. Does not qualify for a more at risk category. Widespread and abundant taxa are included in this category, on the IUCN Red List of Threatened Species

Some facts about the
South African fur seal