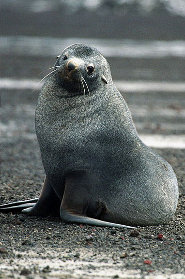 The Antarctic fur seal (Arctocephalus gazella), formerly called the Kerguelen fur seal, is an amazing animal that has been observed remaining underwater for up to ten minutes and diving to depths of two-hundred and fifty meters. However, most of the time the seals only stay under for two to three minutes and descend three or four meters.

The Antarctic fur seal lives in the Antarctic Ocean, and comes ashore to reproduce. The seals reproduce on islands which are free of ice, located along the Antarctic Polar Front. The majority of the species reproduces along the coasts of the island of South Georgia. However, the species has a wide range and has been observed as far away as Brazil.

Male seals are approximately four times larger than the females, and are extremely territorial. The seals have a breeding season that runs from November to January. Each female has one pup per year.

Antarctic fur seals subsist primarily on a diet of krill, fish, and squid. They have been known to consume sea birds, and nursing females almost exclusively eat krill. Predators of Antarctic fur seals include orcas, leopard seals, and humans. The primary danger from people comes in the form of entanglement when man-made debris becomes wrapped around the neck of the seal, and it strangles or drowns.

In the early 1900s, the species was nearly extinct. There were only a few hundred Antarctic fur seals left due to massive over-hunting by people. Thanks to protective legislation, the population has rebounded, and by some estimates may have reached four or five million in the year 2000.

Antarctic fur seals are protected by the Convention for the Conservation of Antarctic Seals (CCAS), the Antarctic Treaty, and the national legislation of countries within its habitat. It is listed as an Appendix II species by the Convention on International Trade in Endangered Species of Wild Fauna and Flora (CITES).

Picture of the Antarctic fur seal by Jerzy Strzelecki, licensed under GFDL

The Antarctic fur seal, kerguelen fur seal is listed as Least Concern (LR/lc), lowest risk. Does not qualify for a more at risk category. Widespread and abundant taxa are included in this category, on the IUCN Red List of Threatened Species

Namings for the Antarctic fur seal

Some facts about the
Antarctic fur seal