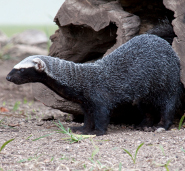 Fortunately for both the greater grison and the honey badger, they do not meet each other because they live on different continents. The honey badger lives in Africa, while the greater grison lives in Central and South America. Its range extends as far north as Mexico and as far south as Brazil. The greater grison is not listed as an endangered or threatened species by the International Union for the Conservation of Nature (IUCN.) This could be due to their adaptability. They make their homes in a variety of habitats, including grasslands and rainforests. They also do well in captivity and have been trained to hunt chinchillas and other small animals for people.

The head, forelegs and underside of a greater grison is covered in short sooty black fur while the back, sides and hind legs are covered in longer, silvery-gray fur. The body is long and slim with the hindquarters higher than the top of the animal’s head. The head is wedge-shaped with small, rounded ears and small, dark eyes. The legs are comparatively short to keep the greater grison low to the ground.

The greater grison lives near water, under rock formations or under tree roots. Adults live in mated pairs but sometimes live alone. This creature is fiercely territorial and fights with any other greater grison that crosses its territory. The average territory size is 2.6 square miles (4.2 square kilometers.) Greater grisons sleep during the day and hunt at night, dusk and dawn. They eat fruits but mostly eat meat from large insects, frogs, snakes, lizards, small birds, eggs, chicks and small mammals like mice.

The mating season is in October. After a 40 day gestation, the female gives birth from 2 to 4 young, sometimes called "puppies." The female does most of the work raising the young and teaching them to hunt. She nurses them for only a few weeks. With luck, a greater grison can live 10.5 years.

Picture of the greater grison by Tony Hisgett, licensed under the Creative Commons Attribution 2.0 Generic license.

The Greater grison is listed as Least Concern (LR/lc), lowest risk. Does not qualify for a more at risk category. Widespread and abundant taxa are included in this category, on the IUCN Red List of Threatened Species

Some facts about the
Grison