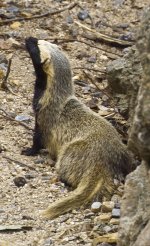 The body of the Lesser Grison (Galictis cuja) and the neck are long, and it has a narrow chest, short tail, short legs and the head is small too. Furthermore, its ears are rounded and also small. Salt and pepper would be the best description for the head's top and the tail. Its belly, throat and legs are pure black but every once in a while, grizzled. A Lesser Grison's fur is basically coarse, but the undercoat is short and soft. The toes are webbed in character, claws look menacing enough, being sharp and curved. Lesser Grisons have heels that are hairy, but the soles are bare.

The Lesser Grison is found in Bolivia, Peru, central Chile, Uruguay, Paraguay, Argentina and Brazil. At Peru, the Lesser Grison stays in high altitudes while in Paraguay, they could be seen in moisture-deprived grounds. Still, these grisons are able to live in a wide number of habitats, and some of these are: brushy territories below timberline, semideciduous montane forests, evergreen lands, steppes, open woodlands, chaco desert, arid srub areas, and even seashore grounds.

The Lesser grison is categorized as monogamous, pairs hunt during times where the young are being reared. The litter size ranges from 2 to 5, and the young are capable of leaving the birth place just after a few days. The Lesser Grison is recognized for its aggressiveness, fact is, there is a Chilean expression which says: "estar como quique", translated as: be like a grison. According to one recorded event, a grison met three dogs (this was in Uruguay) and it was able to hold its own, meaning to say, it must have survived, maybe even killing all three. Here is another amusing incident, a guinea pig was traversing uphill, hidden by tall grass, a grison was moving too (uphill) in a random fashion. Its movement carried it to meet the pig's direction head-on, and it was obvious that neither had been aware of the other's presence. They collided, and the shocked pig fled, while the grison was left behind.

They are active in daytime, but they also go for prey during dusk hours.

Image of the Lesser Grison by Ken Erickson, licensed under GFDL

The Lesser grison is listed as Least Concern (LR/lc), lowest risk. Does not qualify for a more at risk category. Widespread and abundant taxa are included in this category, on the IUCN Red List of Threatened Species

Some facts about the
Little grison