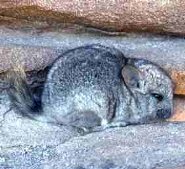 The short-tailed chinchilla (Chinchilla brevicaudata) (which is also called various other names such as the Bolivian Chinchilla, the Peruvian Chinchilla or the Royal Chinchilla) is a species of rodent that can be found in the Andes Mountains in South America. The short tailed chinchilla's range includes Bolivia, Chile, and Peru, and has a very soft fur that was once very desirable in the fur trade industries. The Short-tailed Chinchilla is usually 6-14 inches (16-38cm) in length, having a tiny tail that takes up almost none of that length (and from which it gets its name) along with a weight of about 18-35 ounces (half a kilogram to a full kilogram). The Short-tailed Chinchilla likes to burrow down below shelter rocks, as in they prefer to burrow under the rocks to maintain a good and strong shelter and also typically inhabit particularly colder areas due to their excellent dense fur. Because of this fur, they prefer the mountains, far from predators that would get them if they lived in the warmer areas. In addition to being mountain dwellers, they are also very social and live in colonies. The females will usually have a litter of one to two young at a time, and their main food sources are the grasses and shrubs found around their burrows on the sides of the mountains. The Genus Chinchilla has one other species, the Long Tailed Chinchilla. Chinchilla belongs to the Family Chinchillidae, of which there are two subfamilies. The Subfamily Chinchillinae contains the Chinchillas and also the Lagidiums (mountain viscachas) – the other subfamily Lagostominae contains the Lagostomus (plains viscachas) along with two other extinct genus. The family Chinchillidae belongs to the Superfamily Chinchilloidea which has one other family that houses the Chinchilla Rats, Chinchilloidea belongs to the Parvorder Cavimorpha. Cavimorphia has within it the pacarana, the porcupines, the pacas, spiny rats, and many others, and it belongs to the Infraorder Hystricognathi. Hystricognathi are all the rodents with a specialized jaw and include the tuco-tucos, the agoutis, the acouchis, and many more – and this belongs to the suborder Hystricomorpha, which has the additional Infraorder of Ctenodactylomorphi – or more commonly known as Gundis. This Infraorder belongs to the Order Rodentia – which is the largest order of mammals on earth, containing 2,280 species. In turn this Order belongs to an intermediate unranked order called Glires, which also contains the Lagomorphs (rabbits and their relatives) and the Glires belong to the Superorder Euarchontoglires of which Primates (you and I) are a member, as well as many others and can be traced back to a hypothetical common ancestor that was alive 95 million years ago. This Superorder belongs to the Infraclass Eutheria (placental mammals and extinct close relatives) which belongs to Theria (Placental + Marsupials) and that belongs to the Class Mammal.

For years now they have been bred in captivity. Hunting of the Short-tailed Chinchilla for its fur was common before the 1800s; however by 1829 it had increased to 500,000 animals every year until it became so scarce there was no longer any way of making money from it except by smaller operations and poaching. The first efforts to curtail and save the Chinchilla began in the 1890s, and the first viable laws were passed by 1929, however enforcement was marginal at best, and non-existent at worse. By the 1950's there were no more verified sightings of the Short-tailed Chinchilla in the wild, and it would not be until the 80s that real enforcement began - decades late. Because there is domestic bred stock, it is possible to reintroduce the species, however their fur remains in high demand and their usage as pets is also in demand. To truly bring them back would require an effort and management to prevent hunting and poaching again, along with proper environment monitoring.

WARNING: The Short-tailed Chinchilla is listed as Critically Endangered by the IUCN, and its population is in continued peril in the wild. In earlier times, before mass hunting, the Short-tailed Chinchilla could be found in Chile, Argentina, Peru, and Bolivia in the Andes mountain range, and had populations numbering in the vast millions. However they are now universally extinct from all of these areas with the exception of extant populations possibly living in the border areas between Chile and Bolivia.

The IUCN however, also gives hope that they could be reintroduced from domestic stock used in the fur industry, but a concerted effort to save the Chinchilla in the wild has yet to occur. It is through direct human action of hunting that these creatures are critically endangered and possibly even heading toward extinction in the wild (the end stage before total extinction should all populations in captivity die out).

Picture of the short-tailed chinchilla by Jaime E.Jiménez

The Short-tailed chinchilla is listed as Critically Endangered (CR), facing an extremely high risk of extinction in the wild, on the IUCN Red List of Threatened Species