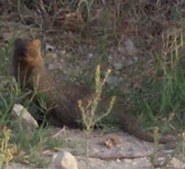 The Egyptian mongoose (Herpestes ichneumon) is the biggest of all African mongooses. It lives on the African savannas. A savanna, if you do not know already, is a broad grassland that bears scattered trees. Egyptian Mongooses (or mongeese) reside in shrub thickets, rock-filled grounds, and forested territories of the savannas. They also like it at the forested areas, provided these places are near a body of water. Did you know that all mongooses are recognized as exceptional snake killers? Also see "Rikki Tikki Tavi" from the Jungle book.

They can grow to 58 cm in height, and 48-60 cm in body length, the tail alone ranges from 33 cm to 53 cm. It can weigh 1.7 - 4 kilograms and has 35 to 40 teeth Its tail is bushy, with a dark ring at the tip. This mongoose has long hair, and the coat sometimes has red-brown possessing yellow dots, but this is rare. An Egyptian Mongoose's snout is pointed, its eyes are encircled by a bare strip of skin.

At the age of 2, both female and male Egyptian Mongoose are sexually mature. Upon birth, the newborns are helpless, but after about 8 days, they have the ability to follow the female parent. The young Egyptian Mongoose is dependent on his parents for about a year, and the males are independent before females. These mongooses are diurnal, and carnivorous. One could eat fruits if he chances upon it, but in the main, they would prefer fish, birds, rodents, amphibians, larvae and insects.

Interesting fact: You may be amused by the fact that it can run backwards, swim, roll over and even raise itself up on two feet, but that's not all, they try to increase their apparent size to look more impressive and threatening by raising their fur and arching their backs, just like cats.

The Egyptian mongoose, ichneumon is listed as Least Concern (LR/lc), lowest risk. Does not qualify for a more at risk category. Widespread and abundant taxa are included in this category, on the IUCN Red List of Threatened Species

Namings for the Egyptian mongoose

A Egyptian mongoose group is called a 'mongeese or mongaggle'.

Some facts about the
Mongoose