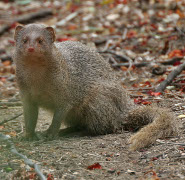 The Indian gray mongoose (Herpestes edwardsii), also known as the Common grey mongoose, is predominantly found in Sri Lanka and southern India although the species can also be found in other locations such as Iran, Saudi Arabia, other areas of India, and some areas of southeast China.

Unlike other forms of wildlife, the Indian gray mongoose is often found close to the dwellings of humans, particularly in areas of tall grass and trees. They are also found in areas of dense vegetation as well as in cultivated farmland. The animal creates its den in burrows and holes and occasionally under rocks and crags. It often lives alone or in the companionship of another of its species. Although very curious, it is rare to see the mongoose venture far away from its den and natural habitat.

The Indian gray mongoose is typically between 14 and 17 inches in length or 36 and 45 centimeters. The tail length of the mongoose is usually about the length of the body, about 17 inches or 45 centimeters. Its long tail length allows for the mongoose to be a very apt climber because of its added ability to balance. The species weighs between 2 and 4 pounds or 0.89 and 1.7 kilograms with the females being significantly smaller than the males. Their coloring is typically a tawny grayish brown color with their underside being lighter than their upper body. The Indian gray mongoose typically lives about 12 years in captivity.

The Indian gray mongoose has a varied diet consisting of rats, mice, other rodents, small birds, bird’s eggs, invertebrates and lizards. They are also known to kill snakes including cobras which requires a great deal of speed and agility. It is one of the only species that is known for its ability to kill these deadly snakes as well as other poisonous snake species. Their ability to kill these potentially fatal animals is due to their speed as well to their exceptionally thick, course coat.

The mongoose is an avid predator and is capable of defending itself against a variety of species. However, the primary predators of the Indian gray mongoose are the leopard as well as the snakes which the mongoose has been known to engage in fierce battle.

The species typically reaches sexual maturity between 6 to 9 months of age and soon after, begins to mate. Another characteristic which makes the Indian gray mongoose so unique is that they do not have a specific mating season. Instead, the mongoose breeds all year long with a gestation period of approximately 60 to 65 days. The litter of the mongoose ranges in size but usually consists of about 2 to 5 babies.

The Indian grey mongoose is listed as Least Concern (LR/lc), lowest risk. Does not qualify for a more at risk category. Widespread and abundant taxa are included in this category, on the IUCN Red List of Threatened Species

Namings for the Indian gray mongoose

A Indian gray mongoose group is called a 'mongeese or mongaggle'.