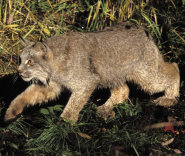 The Canada lynx or Canadian lynx (Lynx canadensis) has a pelage which is frosted in appearance, and just a bit spotted, and the pelage's color varies. It can be red-brown, or gray, and very rarely, what they call the blue-lynx. They have long back legs and a short tail, but their feet are fur-layered, making them look like snowshoes, which in fact they are.

A lot of people get confused in recognizing them, mistaking them for a bobcat, but they could be distinctively recognized by the tip of the tail. The Canada Lynx's tail tip is black all around, whereas the bobcat's tail tip has a white underside.

The Canadian lynx can be found in Alaska, Canada and some parts of the US. At the conclusion of gestation, females would give birth to one up to eight newborns. Weaning is approximately three to five months, and an individual Canada Lynx would attain sexual maturity after 2 years.

This lynx is solitary, except for a female with newborns. Their diet almost totally consists on the snowshoe hare, and because the latter's numbers go up every decade, so does the numbers of the Canada Lynxes. If a single hare is nowhere to be found, desperation would make a lynx go after birds or rodents.

Indeed, trapping is still one of the major dangers to the lynx's survival, as this particular animal is easily captured. It may sound alarming, but the future of these lynxes are not as bad as the other kind of felines- according to some experts.

Interesting fact: the debates continues whether this lynx is a separate breed from the Eurasian kind, or just a subspecies, and the jury is still out on this one. The number of experts on both sides of the fence are equally divided.

The American lynx, canada lynx is listed as Least Concern. Does not qualify for a more at risk category. Widespread and abundant taxa are included in this category, on the IUCN Red List of Threatened Species

Some facts about the
Canada lynx