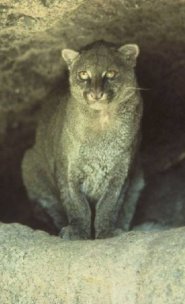 A Jaguarundi (Herpailurus yaguarondi) may not look like a cat in the traditional sense, and some people may say that it resembles an otter more than any cat. They can be found in Central America, states of South America all the way south to Argentina and very rarely, they could be seen in Texas and also New Mexico. The Jaguarundi's color goes from dark brown to a chestnut hue. Jaguarundis have short legs, small heads and weasel-like ears. Upon being born, a Jaguarundi is spotted, but would lose these marks when they reach 4 months.

They are genetically closer to the bigger felids, their chromosome number is 38, just like the jaguar, while small felids only hold 36 chromosomes. A Jaguarundi is usually seen in lowland territories with a dense cover, like forests and scrub areas. They are more often than not found near water (running water) and it is no wonder that they are excellent hunters of fish. They catch them with their front paws, but they eat other prey too.

Although it is not hunted that much for their fur, their numbers are on the way down. This is principally caused by deforestation and habitat loss, which are the major reasons why so many animals become endangered (not just the cats).

Interesting fact: It is believed that they are likely to be the descendants of the Puma (ancestral), which originates from Asia.

The Eyra cat, jaguarundi is listed as Least Concern. Does not qualify for a more at risk category. Widespread and abundant taxa are included in this category, on the IUCN Red List of Threatened Species