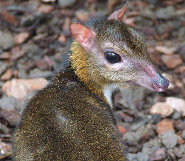 The lesser mouse deer or chevrotain (Tragulus javanicus) is the smallest hoofed mammal in the world. Although it is a shy and secretive forest dwelling relative of the deer and rarely seen, it is very well known throughout Southeast Asia. Its species name T. kanchil recalls its Malay name 'Sang Kancil', a renowned trickster and folk hero.

At first glance, the lesser mouse deer resembles a tiny, rabbit-sized deer that walks on its tiptoes. Adults normally measure about eighteen inches (45 cm) long. Standing on their pencil-thin legs, shoulder height is a mere twelve inches (30 cm), and they weigh about five pounds (2.3 kg). Lesser mouse deer have soft reddish-brown fur marked with a pattern of pale spots or stripes running along the sides of the neck and a pale-colored underside. Unlike deer, the males have no antlers, but do sport a pair of canine teeth that can be seen projecting downward from the upper jaw like two tiny tusks. Males make use of their teeth to defend themselves and their mates against rivals.

The natural habitat of the lesser mouse deer is the moist tropical lowland forest regions of Brunei, Cambodia, Indonesia (Sumatra, Java and Borneo), Laos, Malaysia, Myanmar (Isthmus of Kra), Singapore, southern China, Thailand and Vietnam. Mouse deer feed on fallen fruits, tender shoots, young leaves and fungi found along the ground and in the low, dense vegetation they inhabit. These tiny browsers are crepuscular feeders, meaning that they prefer being active in the dim light of dusk and dawn. In their forest home, mouse deer travel along paths which resemble tunnels of thick vegetation leading to resting places and feeding areas. Males are very territorial and they regularly mark their territories with scent glands found under their chins.

Female mouse deer may give birth to a single fawn at any time of year. Like other hoofed animals, newborn fawns are precocial and stand within thirty minutes of being born. The does wean their fawns at around twelve weeks. The fawns can breed at five to six months, and may live for twelve years.

The natural predators of the lesser mouse deer include crocodiles, snakes, birds of prey and all forest cats. They are taken by humans throughout most of their range for meat and skins. Hunting, trapping, roaming packs of dogs and habitat destruction pose their biggest threats.

Sang kancil (pronounced: Kahn-cheel), the diminutive but wise mouse deer, holds a place of pride in Malay and Indonesian folklore. The tiny hero is cunning and intelligent, and able to prevail over larger tyrants and foes. In these tales, the only thing "lesser" about the lesser mouse deer is his size.

The Kanchil, lesser mouse deer is listed as Least Concern (LR/lc), lowest risk. Does not qualify for a more at risk category. Widespread and abundant taxa are included in this category, on the IUCN Red List of Threatened Species

Namings for the lesser mousedeer

Some facts about the
Lesser mouse-deer