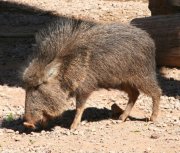 The Chacoan peccary (Catagonus wagneri) can be found in Bolivia, Paraguay and parts of Brazil. They have another name, and it's an amusing monicker, they are also referred to as "Pig from Green Hell". Why? It is in reference to their habitats considered as more impenetrable than a 14th century castle in wartime.

Chacoan peccaries stay in dry and hot places, usually in those places where mankind does not visit. Its weight ranges from 29 to 49 kilograms, and the Chacoan peccary possesses a lot of pig's traits. Its rostrum holds a leather-like snout, its fur is usually brown, and at the shoulders have a white coloration. The Chacoan peccary differs from its relative-peccaries in the sense that they have longer ears, tail and snout. It also has an extra hind toe (3rd), as opposed to other peccaries with only a pair. It could give out a milky, smelly substance which acts as an "identifier".

The births are connected to seasons of food availability and rainfall occurrences. Average number, offsprings-wise is 2-3. Those newborn peccaries are precocial, meaning, they could move about just some hours after the birth. The typical Chacoan peccary journeys with others, forming herds of around 10 members. These groups are active in daytime, and the usual travel cycle is forty-two days, within the boundaries of the range they would consider as their own.

Peccaries communicate with another via chatters and grunts. As a form of defense, members of the herd could line up to form a wall.

Interesting fact: "Iron Kidneys"- in essence, that is what these peccaries have. Their kidneys have the capability to crush a cactus' acids.

The Chacoan peccary, tagua is listed as Endangered (EN), considered to be facing a very high risk of extinction in the wild, on the IUCN Red List of Threatened Species

Some facts about the
Chacoan peccary