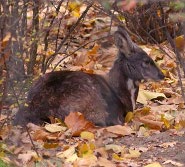 The Siberian musk deer (Moschus moschiferus) weighs 15-38 lb (7-17 kg). The male of the species has canine teeth that can grow as long as 3 inches (8 cm) and extend below the lips. The short fur varies in color from chestnut to gray. It leans on its acute sense of hearing for almost every situation. Generally, it is a nocturnal creature. Within the area it considers to be home, it uses the same trails that connect its hiding areas, feeding regions, and areas for other activities over and over. It consumes an array of vegetation, including flowers, leaves, young grasses and shoots. It also dines on twigs, lichens and mosses, particularly in the winter season. If food is scarce, then it will chew the bark off a tree or stand on its hind legs to pick leaves. Excluding the female and the young offspring, the deer is solitary except for during the rutting season, at which time females live in small groups. The male leaves the upbringing to the female. Siberian musk deer strongly guard their territory. Male deer mark their territories with scent by rubbing the gland of their tail against stones and trees.

The Siberian musk deer likes to make its home in brushland and forest between altitudes of 8,500 and 11,800’ (2600 and 3600 m). The musk deer can be found in Siberia, northeast China, Mongolia, South Korea, Sakhalin Island, and North Korea. The musk deer population declined by an estimated 50% during the early 1990’s because of high demand for its natural musk, mostly in Japan, China, and Korea. The present population is not known, but it is certainly declining. Currently, the Siberian musk deer is an endangered species.

Overhunting of the male deer for its musk is the main reason for the population decline. Also, males and females that are too young for producing musk get captured in the traps intended for males 3 years of age or older. Disappearance of forest habitat also factors into the decline.

The musk gland of the male is similar in size to a clenched fist, and it is located between the umbilicus of the abdomen and the genitals. The musk from this gland is used to make perfume and soap and also for medicinal purposes in the Far East. The price of musk is high. In 1972 in Nepal, musk cost more than its weight in gold.

The Siberian musk deer is listed as Vulnerable (VU), considered to be facing a high risk of extinction in the wild, on the IUCN Red List of Threatened Species

Namings for the Siberian musk deer

Some facts about the
Siberian musk deer