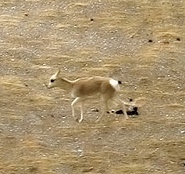 The Tibetan antelope or chiru (Pantholops hodgsonii) may be partially responsible for giving rise to the mythical unicorn. Males or bucks sport two long, gently twisting horns that reach 18 inches (50 cm.) The endangered chiru, despite protection, is still heavily poached today for shatoosh (their soft wool coats), meat and those incredible horns. In 1950, there were an estimated one million chiru. Now, there are less than 75,000. Their only known predator is man. Shatoosh shawls fetch thousands of dollars, but it takes the bodies of four adult chiru to make up just one shawl.

The chiru lives on the Tibetan plateau which extends as far south as northern India and as far north as China. They prefer living rounded hills and on the sides of mountains as far up as 19,680 feet (6000 meters.) They need their dense coats in order to survive the wind and cold in this environment. They used to be found on grasslands and valleys, but farmers have pushed them out to make room for their herds.

Chiru look like African antelope, except for the huge horns on the males. Their undersides and rumps are white or pale yellow while their backs and sides are a light grey or tawny brown to blend in better with the grey and brown hillsides where they live. Their heads are predominately brown, but males tend to sport a dark brown to black face. Females or does do not grow horns and do have a dark face.

Bucks are usually larger than does. Bucks can grow as tall as 50 inches (127 cm) while does grow to 35 inches (88.9 cm.) Bucks can grow as heavy as 88 pounds (40 kilograms) while does weigh a feminine 57.2 pounds (26 kilograms.) But even the largest buck is still much smaller and lighter than a horse or a six foot (2 meter) person.

After migrating north to their traditional calving grounds, does give birth to a single calf in June or July. Female calves will live with their mothers most of their lives, but male calves will leave their mothers at about one year of age. Males live with other males while females prefer to live with other females and calves. The two groups come together during the mating season and for migration. Younger females learn the migration routes from their mothers or other older females. In the late autumn, they move south to their winter feeding grounds.

Chiru spend most of the day grazing on whatever vegetation they come across, including herbs and shrubs. Before laying down to rest, they paw a sight bowl-shaped indentation in the ground about one foot (30.5 cm) deep. Chiru run faster than Thoroughbred racehorses, reaching speeds of 50 miles per hour (80.47 kilometers per hour.) Females tend to live longer than males. About two-thirds of all male calves will die before reaching 24months old. With luck, a chiru can live for eight years.

Picture of the chiru by B_cool, licensed under the Creative Commons Attribution 2.0 Generic license

The Chiru, tibetan antelope is listed as Endangered (EN), considered to be facing a very high risk of extinction in the wild, on the IUCN Red List of Threatened Species