The Charming and Social Degu 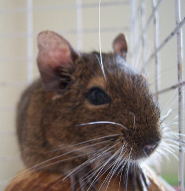 The degu (Octodon degus) is a small mammal belonging to the rodent family, and is most closely related to the guinea pig and chinchilla. Degus are sometimes referred to as brush-tailed rats, and originate from the grasslands of Chile. They average at about 25 to 30 centimeters (9.8–12.2 inches) in length and weigh 170 to 300 grams (6-11 ounces). The degu has small ears, powerful hind legs and a long tail similar to a rat's tail except furry. The degu's genus name, Octodon, comes from the appearance of its front teeth, which are in the shape of a figure 8.

Degus are strict herbivores, and in the wild their diet consists largely of dried grasses, shrubs and the occasional seed. One interesting fact about the degu's diet is that these animals seem to be highly susceptible to diabetes due to their natural diet consisting of very low amounts of sugar. For this reason, degus have become popular in the medical research field.

Degus are highly social creatures, and in the wild they live together as large families in burrows. They are communal diggers, and organize coordinated digging projects. Through teamwork, degus create vast circuits of tunnels and nests that couldn't be made by one individual degu. Even the female degus will sometimes nest and nurse their pups communally. Degus tend to forage for food in groups as well, in order to increase the chance of detecting nearby predators. They communicate primarily by sound, and can produce up to 15 unique sounds. Degus are diurnal, meaning they sleep during the peak daylight and nighttime hours and awaken during dusk and dawn, when it is harder for predators to find them as they forage for food.

Because of their popularity in diabetes research, degus were imported from Chile during the 1950s, and it was found that they make charming pets. While not mainstream pets yet, they are slowly becoming more popular. Degus are quite easily tamed, and remain active, playful and extremely social in captivity. They are very inquisitive and like to chew, however, so a large metal cage with plenty of running and climbing room is a must. Also, degu owners must make sure to provide their pets with other degu companions, since they are such social animals. They must also make sure to provide the right type of low-sugar diet. Degus will even bathe themselves in dust like chinchillas do.

The Degu is listed as Least Concern (LR/lc), lowest risk. Does not qualify for a more at risk category. Widespread and abundant taxa are included in this category, on the IUCN Red List of Threatened Species

Some facts about the
Degus