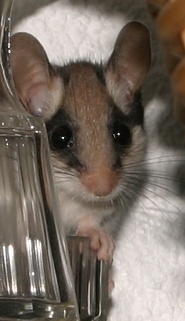 The garden dormouse (Eliomys quercinus) is also known as the Asiatic garden dormouse or AGD. They are the latest small rodents to enter the exotic pet trade. Whether they can be successfully domesticated such as the gerbil, remains to be seen. The garden dormouse’s used to live in a huge area from Portugal to the Russian coastline and down into Northern Africa. Now they can only be found in forests in Mediterranean countries, Corsica and northern Germany. The AGD is listed as Near Threatened by the International Union of the Conservation of Nature.

Garden dormice are important food sources for many wild creatures, including foxes, weasels, stoats, owls, hawks, ravens, magpies and crows. Domesticated cats take a large toll on garden dormice populations. But habitat loss is their biggest threat. As the forests dwindle, so does the food supply for garden dormice. The overall world population of garden dormice declined in half during the past 30 years.

The garden dormouse is colored like a European badger -- a light grey-brown body, white belly, and a black striped face. Their paws are pink and mostly hairless. The ears are large and shaped like bat’s ears. They have wide dark eyes which helps them navigate in the darkness. Their long, thin, fur-covered tails are brown at the base and mainly black with a white tip. Like a lizard, a garden dormouse can detach its tail if a predator grabs it. Unlike a lizard, a rodent cannot grow its tail back.

An adult, whether male or female, weighs from 1.59 to 4.23 ounces (45 to 120 grams.) This is lighter than a pet hamster. Their weight greatly fluctuates depending on how close they are to hibernation. Garden dormice in autumn will normally weigh more than in the spring. Their body length from nose to tail tip ranges from 7.4 to 11.8 inches (19 to 30 cm,) with the tail making up nearly half of that length.

Females awaken from hibernation in early spring and literally whistle for a mate. Garden dormice are social rodents that prefer to live near each other, so she does not have a long wait. She makes a nest in a burrow for her offspring of grass, moss and her own fur. Her gestation is a mere 22 to 28 days. She averages 4 to 5 offspring in a litter, but can produce as many as 8. They open their eyes when three weeks old and weaned one week after that. They become sexually mature when they reach one year of age.

Garden dormice eat more insects and bird eggs than they do nuts, seeds and fruits. They can also kill and eat baby birds or each other. They store food in their cheeks to deposit in a burrow for later. They can make homes from a variety of sources, including abandoned bird nests, tree trunks, under the ground, in rock crevices and inside of human homes. If lucky, a garden dormouse can live up to five years.

The Garden dormouse is listed as Vulnerable (VU), considered to be facing a high risk of extinction in the wild, on the IUCN Red List of Threatened Species

Some facts about the
Garden dormouse