The Eurasian Beaver - Keeping Us Warm and Well 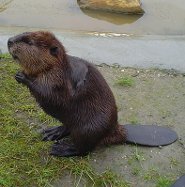 The Eurasian beaver (Castor fiber) is not only a charming animal, but a useful one as well. Throughout history, this species of beaver was considered valuable for its fur, which ranges in color from light rust to brown to black. Beaver fur has many uses, chief among which is the making of hats. In addition to its fur, the Eurasian beaver has a unique secretion known as castoreum; originating in the scent glands of the animal, it is believed to have medicinal properties.

The Eurasian beaver was once plentiful Eurasia, but due to these desirable characteristics it has been hunted extensively. The species is still recovering from reaching the brink of extinction at the beginning of the 20th century. Reintroduction programs in many European countries has brought the animal from a mere 1,200 known specimens to 639,000 by the end of 2003. Populations of Eurasian beaver are growing in countries such as Romania, Sweden, and Great Britain. They can still be found as far east as China.

The preferred habitat of the Eurasian beaver is on riverbanks in dense forests. Avid swimmers and divers, they live half their life in the water and half on land. They tend to be somewhat nocturnal, coming out of their cave homes at night to feed on twigs, bark, and river vegetation. Busy builders as well, they never eat the same type of trees that they use for constructing dams and lodges. These dams and lodges protect the beaver from predators, which include wolves, red foxes, and brown bears. In fact, their most effective predators have been humans.

Beavers tend to charm humans because they remind us of ourselves. They are quite social, and tend to live in families of 5 to 8 individuals. Often an older beaver couple "owns" a specific area or territory, and the other members of the group submit to them. The female member of this couple is most often the dominant one.

Though once brought to the edge of extinction, the Eurasian beaver (Castor fiber) is now increasing in populations throughout Europe and Asia. Though its fur and secretions are valuable to humans, this lovable animal is finally regaining its place in the wild.

The Eurasian beaver is listed as Near Threatened (NT), is close to qualifying for or is likely to qualify for a threatened category in the near future, on the IUCN Red List of Threatened Species

Namings for the Eurasian beaver

Some facts about the
European beaver