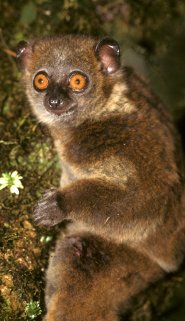 This is an ancient species which is facing extinction due to habitat loss and from poaching. All lemurs need a large space filled with many type of trees in order to find enough to eat. Tree species flower and bear fruit at differing times or else the lemurs would starve. There is still a lot to be learned about the small-toothed sportive lemur but it may be gone forever if the forests of Madagascar are felled for farming.

A small-toothed sportive lemur looks like a cross between a monkey and a weasel. They have the long necks and long faces of a weasel, but the bodies and flexible hands of a monkey. Their short but dense fur varies in shades of brown from tan to chestnut on their backs and sides, but turns a pale grey to white on their necks, bellies and inside of the legs. Adults have a dark brown to black dorsal stripe going down their backs to their tails. Their large eyes are bright yellow to pumpkin orange. Like most primates, including humans, lemurs have binocular vision. Their muzzles and hands are black. Their hind legs are built like a kangaroo’s so that when on the ground, they walk with their forelegs and hop with their hind.

Adults weigh from 2 to 2.6 pounds (0.9 to 1.2 kilograms), which is lighter than a domestic cat. From head to tail-tip, adults measure 22 to 25 inches long (55 to 64 cm.) As their common name suggests, the small-toothed sportive lemur does have small teeth in comparison to other lemur species known at the time of its discovery in 1894. Their hands possess five long mobile fingers, excellent for scratching fur, grasping onto narrow tree limbs and grasping food such as leaves, flowers and fruit.

Unlike many other primates, this is a lemur that prefers to live alone. Males use loud crow-like calls to mark the borders of their territories. Females also have territories. Males can overlap female territories when they come into season but males cannot trespass into another male’s territory, or they will fight.

Small-toothed sportive lemurs spend most of their lives leaping from tree to tree. They sleep during the day to avoid birds of prey and search for food at night. This species of lemurs also shares a trait with rabbits and guinea pigs – they excrete a special dropping called a cecotroph. This helps them to digest their tough, plant-based diet. If they do not eat their cecotrophs, they can die.

Namings for the smalltoothed sportive lemur

A smalltoothed sportive lemur group is called a 'troop'.