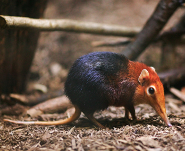 The black and rufous elephant shrew is aptly named. Their hindquarters and tails are a glossy black while their head and forequarters are a rich red (rufous means "red" in Latin) They have very round guinea pig-like bodies with long, deer-like legs, triangular ears and a long, mobile nose. The mouth is located underneath the long nose close to the head. The "trunk" is used to push through leaves or dirt to uncover food like insects, small frogs, tiny mammals like baby rats, fruits and vegetables.

Both males and females look alike. Adults weigh only 1 pound (0.45 kilograms) and grow to a height of 10 inches (25.4 centimeters). Their bodies, excluding the tail are 12 inches (30.48 centimeters) long. The naked, mouse-like tail varies in length from 7 to 10 inches (17.78 to 25.4 centimeters. The elephant shrews slap their tails against their hindquarters to threaten predators such as large snakes, leopards and hawks.

Black and rufous elephant shrews are born fully furred with eyes open. They are weaned after a mere 21 days, but their mother will care for her litter of 1 to 3 babies until they are one month old. Then, the babies leave their parents and find territories and mates for themselves. The females do all of the work of raising the babies, plus chasing any other female black and rufous elephant shrews out of the pair’s territory. Territories for each pair range in size from 2.47 to 4.2 acres (1 to 1.7 hectares).

The male stays with one female for life. He chases other males away and marks territory with a strong scent secreted from glands. Both makes and females use scent markings to leave trails to food. Because the elephant shrews live near the equator, they do not experience winter. The pair mates year-round and a female can have three or four litters per year. Her gestation is a brief 47 days. The pair is active during the day and sleeps at night in a make-shift nest of dead leaves.

Picture of the Black and Rufous Elephant Shrew by Joey Makalintal from Pennsylvania, USA, in Philadelphia Zoo, licensed under the Creative Commons Attribution 2.0 Generic license.

The Black and rufous elephant shrew, black and rufous sengi is listed as Vulnerable (VU), considered to be facing a high risk of extinction in the wild, on the IUCN Red List of Threatened Species