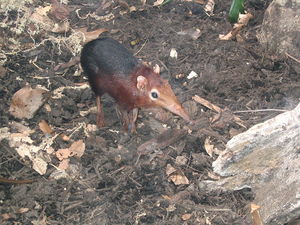 Elephant-shrews (Macroscelidea), also known as jumping-shrews, are small mammals native to Africa. The traditional common name 'elephant-shrew' developed due to the imaginative resemblance between elephant trunks and the long noses of the elephant-shrews. However, the less common name 'jumping-shrew' did not come about because the animals jumps or hops about in anyway.

Proper classification of the elephant-shrews proved elusive for quite some time. In the past, zoologists classified them as part of the Insectivora along with the shrews and the hedgehogs. During other periods, the science community grouped them together with tree shrews, included them in the order of Lagomorpha, along with hares and rabbits, and even regarded them as distant relatives of the ungulates, of which the llama belongs.

However, modern evidence strongly supports the current placement that the elephant-shrew is a member of the superorder Afrotheria. Afrotheria is a clade of mammals that includes aardvarks, elephants, golden moles, hyraxes, sea cows, sengis (elephant-shrews), and tenrecs. It is quite remarkable and interesting to note that the elephant-shrew has more than a fancied connection to the elephant. With this modern classification, it became common to use the name 'sengi' and to use hyphens in elephant-shrew and jumping-shrew in order to distinguish these animals from the shrew.

One of the other remarkable aspects of the elephant-shrew is that some members of the family are living fossils. Scientists use the term 'living fossil' to describe species that have lived for a significantly long time. In this case, it is as much as tens of millions of years. For instance, the short-eared elephant-shrew has changed very little from its ancestor that flourished on the African continent some 30 million years ago.

Like their ancestors, the elephant-shrews are an insectivorous mammal, which means that they are a carnivore with a diet consisting almost entirely of insects and other similar small creatures. The short-eared elephant-shrew, the most common of all elephant-shrews, grows to an average weight of 40g or approximately 1.4 ounces. They reach an average length of 23 cm, which is approximately 9 inches. However, the tail comprises more than half of this length, reaching 12 cm or 4.7 inches.

Elephant-shrews do not exist outside the continent of Africa and most of the species live south of the Sahara Desert. One notable exception, the Elephantulus rozeti, prefers semi-arid habitats so lives in areas of North Africa such as Algeria and Marocco. Other species to habitat relationships are the Elephantulus in the savannas, Rhynchocyon in lowland forests and mountains with dense underbrush, and the Pedrodomus that lives in the undergrowth of central Africa and its east coast.

The primary predator of the elephant-shrew is the human who use it as a source of food. However, the most serious threat to the elephant-shrew is that there habitats are distributed in highly fragmented forest areas. This keeps the population relatively low because it's often difficult for the animal to move to an area where potential mates and resources are more abundant.