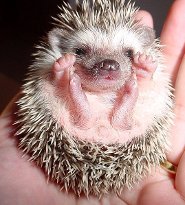 The desert hedgehog (Hemiechinus aethiopicus) is the smallest member of the hedgehog family and, like its name implies, lives in arid desert regions. It is widespread and can be found throughout parts of Africa and the Middle East, including the Sahara, Morocco, Egypt, Sudan, Ethiopia, Syria, Israel, Jordan and Iraq. The desert hedgehog is a highly adaptable little creature and because of this, it has continued to thrive and maintain a stable population despite encroaching human habitation in some areas.

The desert hedgehog is particularly small, averaging only 16-29 centimeters in length and weighing from 310-435 grams, with males typically larger sizes than females. In appearance, the desert hedgehog matches its environment fairly well; the back spikes are often banded dark with paler tips while the forehead and underfur is mainly white or gray. Feet, tail and snout are all dark to sandy brown.

Despite its small size, this hedgehog has a protective layer of spines that form a formidable barrier against hawks, jackals, large snakes and predatory lizards that might otherwise make a meal of it. When threatened, the muscles along the hedgehog's skin contract to form a tight ball of spikes that protect it against attack.

The desert hedgehog itself is omnivorous, feeding mainly on insects, small snakes and lizards, spiders, eggs and fruit. Though it can survive in very arid regions, it prefers to make its home in an oasis, garden or where plant and animal life is more abundant than what is typically found in the open desert. Desert hedgehogs are usually a welcome sight in any groves or home gardens, as they help to keep pest insects under control. It is a nocturnal creature, doing most of its foraging at night and resting in what shade may be available during the hottest parts of the day.

Interestingly enough, the desert hedgehog hibernates for short periods during the coolest winter months, January and February, before emerging during the spring breeding season in March. Gestation is usually about 40 days, and females give birth to litters ranging between two to six young.

The Desert hedgehog is listed as Least Concern (LR/lc), lowest risk. Does not qualify for a more at risk category. Widespread and abundant taxa are included in this category, on the IUCN Red List of Threatened Species

Namings for the desert hedgehog