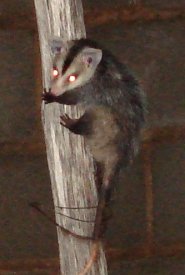 The White-eared opossum (Didelphis albiventris) is a non-endangered species that lives in much of South America, and can be found in Venezuela, Guyana, Paraguay, Peru, Suriname, Uruguay, Bolivia, Brazil, Ecuador, and Argentina, and more. It is a normally ground dwelling species that can be found in trees, as it goes between them and is an apt climber. The White-eared Opossum is about 1-3 lbs in weight (about a kilogram). The White-eared Opossum is a small marsupial mammal that is covered in black fur, with white guard hairs covering the face and whiskers on the ends of the animal’s narrow snout. Additional white can be found on both sides of its face leading to its ears that are also covered in white fur. Their tails are long and taper off while being covered in dark fur that ends halfway, with the rest of the tail appearing leathery and long.

The White-eared Opossum is a part of the genus Didelphis which has five other species of opossum. Didelphis belongs to the subfamily Didelphinae which has fifteen other genus of opossums, and the subfamily Didelphinae belongs to the family Didelphidae which has one other subfamily of opossum. Finally the family belongs to what is called the "Common Opossums" or Didelphimorphia, an order in the Marsupialia infraclass. Having been a species, similar to how the coyote adapted in the U.S., to find success alongside humans they are sometimes seen as a pest. The White-eared Opossum is an omnivore and will eat animal matter, plant matter, and insects too. It prefers insects, small mammals and lizards, along with fruits and edible foliage. Because of its adaptability the White-eared Opossum can survive climate changes, such as influx or decrease in the supply of water, temperature irregularities, and various degrees of humidity and overall landscape. Because of its climbing skills it can stay in trees and be arboreal, or if challenged with a different terrain type it can stay on the ground in the brush. The locations they live range from valleys to mountains to fields and urban areas - but the most populous place you will find them is in a semi-deciduous forest with many places to climb and hide.

The White-eared Opossum does have a set breeding period from September to May, with the variant being mostly the rainfall pattern. Like all marsupials, the offspring are born very small and must climb to the mother’s pouch after just a short time in gestation (pregnancy). Within 46 days after climbing into the pouch they will be ready to venture for short times outside of it. The usual litter size is around four to six opossums, however some have had larger, and some have had smaller, as is the case with any animal species. They quickly mature and can mate at nine months of age.

Interesting Facts about the White-eared Opossum:

Picture of the white-eared opossum by Abinoam Praxedes Marques Jr., licensed under GFDL

The White-eared opossum is listed as Least Concern (LR/lc), lowest risk. Does not qualify for a more at risk category. Widespread and abundant taxa are included in this category, on the IUCN Red List of Threatened Species

Namings for the whiteeared opossum

A young / baby of a whiteeared opossum is called a 'joey'. The females are called 'jill' and males 'jack'.

Some facts about the
White-eared opossum