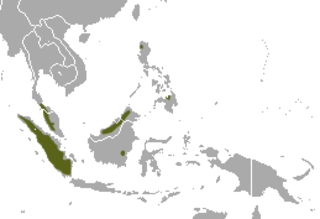 The Dayak fruit bat, dyak fruit bat is listed as Near Threatened (LR/nt), is close to qualifying for or is likely to qualify for a threatened category in the near future, on the IUCN Red List of Threatened Species

Namings for the Dyak fruit bat

Facts about the Dyak fruit bat

One species of fruit bat (Dyacopterus spadiceus) is notable for this reason.

Among the facts to be treasured from Jones' book: that the male Dyak fruit bat is the sole mammal to use its nipples for a purpose other than the erotic, by giving suck to its young; that the village weaverbird, in Africa, rejects most cuckoo eggs, but since it was introduced to America, seems to have lost its ability to recognize them; that the female hyena possesses a clitoris of a size equal to her male partner's penis, and for intercourse she "rolls it back, rather like a man might roll up the sleeve of his shirt"; that the male gorilla, on the other hand, has a "guilty secret": his one-and-a-half-inch member. (Full text)