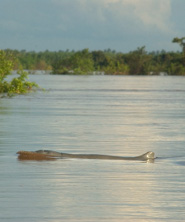 The Irrawaddy Dolphin (Orcaella brevirostris) is a unique mammal that wanders in the seas and rivers of South and Southeast Asia. This small, beakless aquatic mammal lives at peace with humans. The dolphin swims in freshwater lagoons, large rivers, as well as estuaries. The Irrawaddy Dolphin has a protruding forehead, ridge-like lips, and a jaw that contains 15-20 pairs of teeth. The head muscles allow the dolphin to demonstrate several facial expressions as they move back and forth and side to side and is easily distinguishable from many of the other species of dolphins.

This beautiful mammal can grow up to 2.44 meters (8 feet) after being born as a meager one meter (3.3 feet). At birth, the calfs weigh approximately 10 kilograms (22 pounds) and can weigh 90-150 kilograms (198-330 pounds) as an adult. The Irrawaddy's color can range from a beautiful blue to a light gray. These mammals will never win a swim competition because they tend to swim at a slow pace. The Irrawaddy have a decadent pallet which includes crustaceans, squid and fish. While they enjoy their meals, the Irrawaddy engages in spitting water, which is unique to this species of dolphin. Socializing is another activity that includes the spitting of water. They also use creaking, clicking, and buzzing sounds to communicate with one another.

The Irrawaddy are in the orca family, however unlike the

In fact, these mammals can be found working side-by-side with the local anglers. They will force fish to the nets for the villagers and then feast on the overflow. While the Irrawaddy enjoys its meal, the fishermen receive a net full of different types of fish to make their living.

The Irrawaddy Dolphins live in groups of six or less, although at times the group can grow to 14 individuals. This species is rather shy and demure and enjoy keeping to their group. They do not swim on top of the water, nor do they ride the waves in front of ships. Occasionally they may poke their head out of the water spy the horizon, but more often than not, they swim underwater and only come up for air. If scared, they can stay underwater for up to 12 minutes.
Another interesting fact about this species of dolphin is their relationship with the fishermen in Vietnam. The natives believe this animal to be sacred. If the dolphins are caught in a net, the Vietnamese will set them free. When a dead dolphin is discovered, the natives will cremate the body and hold a religious service as a sign of respect to the sacred mammal.

According to the Wildlife Conservatory Society (WCS), the Irrawaddy Dolphins are quickly disappearing. Two reasons explain this phenomenon. First, many are caught in gillnet fisheries for sharks and are accidentally killed. Second, global warming is attributing to the declining amount of fresh water, which they need to survive. The Irrawaddy Dolphin is a remarkable sight and requires a workable plan to remain in existence. Not only would the extinction mean a loss of a unique animal, but also the loss of the unique working relationship between the Irrawaddy and fishermen in Asia. As countries collaborate with the help of the IUCN and scientists all over the world, perhaps future generations can experience these distinctive wonders.

Picture of the Irrawaddy Dolphin on the Mekong River at Kratié, Cambodia, by Jean-Claude Durka, licensed under GNU Free Documentation License

The Irrawaddy dolphin, snubfin dolphin is listed as Data Deficient (DD), inadequate information to make a direct, or indirect, assessment of its risk of extinction, on the IUCN Red List of Threatened Species

Namings for the Irrawaddy dolphin

Some facts about the
Irrawaddy dolphin