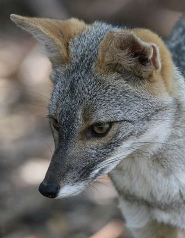 The Peruvian Desert Fox has a somewhat limited range and can only be found on the coast of north-western Peru and south-western Ecuador. This animal frequently lives in agricultural, dry forests, and sandy deserts. Peruvian desert foxes are about eight-five centimeters, or two-point-eight feet, long including their tails. They usually weight between four and five kilograms, or about nine to eleven pounds. This animal is the smallest known species of zorro. Peruvian desert foxes are mostly grey with a lighter underbelly, although they sometimes have some reddish brown or tan patches of fur as well.

These animals are nocturnal and spend much of their days inside a burrow. They dig these burrows themselves using their curved claws. While sleeping, Peruvian desert foxes tend to wrap their tails around themselves to keep warm. These animals prefer a diet made up mostly of meat, although they will eat other items as well. Some of the foods typically eaten by them are birds, insects, seed pods, berries, small mammals, reptiles, and

These animals are opportunistic and will even eat carrion. They will often use their claws to dig up food if necessary.

Very little is known about the socialization and reproductive cycles of Peruvian desert foxes, although it is known that the young are born in October. It has been difficult for scientists to keep track of their population trends as well, but it is thought that less than fifteen thousand adults are left in the wild. It is estimated that these animals will face a ten percent population decline in the next decade. These animals are currently listed as Near Threatened by the IUCN Red List of Threatened Species. There are a few factors that contribute to the decline of these zorros.

These animals have a limited range, so habitat loss can have a very negative impact on their population. Habitat loss and degradation are considered the biggest factors in the Peruvian Desert Fox’s decline. This animal is also often hunted for various uses. Parts of the animal are used as souvenirs while others are used in rituals by certain shamans in the area. Finally pups are taken to be sold in the pet trade. The final major threat to these mammals is that they are often killed by farmers because they are a threat to livestock.

The Peruvian Desert Fox is an intelligent and hard to find species. Hopefully more will be known about these animals in the near future. More information would also help conservation efforts to better understand and protect this animal.

Picture of the Peruvian desert fox by Mike weedon, licensed under GFDL

Namings for the Sechura fox