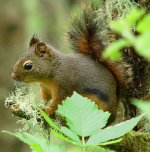 A Douglas Squirrel (Tamiasciurus douglasii) is a kind of sentinel, it acts as one for the other forest animals by letting out a harsh sound when predators (that includes us, mankind) come into proximity. These squirrels take refuge in tree holes, which were built by the woodpeckers, and their nests are made up with moss and bark. Since they are in fact squirrels, it is no surprise that they have as their diet: seeds from Shore Pine, Douglas Fir, and the other kinds of cones. Douglas Squirrels would slice off a scale, throw this off, then get the seed within. Those discarded scales would then in time, go up like a tower from being accumulated, and this is called midden (if you see one, chances are, a squirrel is just within sight).

A Douglas Squirrel would also harvest nuts and green cones, then hide these to serve as their "buffer" for winter season. A lot of cones in fact are forgotten over time, and germination by the seeds would occur. Mushrooms could also be taken in by a Douglas Squirrel, but not only that, flowers, mice, invertebrates are also eaten at one time or another. They are active all throughout the year, save for the very cold season. In the latter, a Douglas Squirrel would just stay inside a tree (the holes) and sleep, just like the other kinds of squirrels. As soon as the climate heats up again, they would resume their running ways.

One lone squirrel would inhabit an area of around 1 hectare, and is very possessive of this. It would chase the other squirrels if they violate its sanctity, but in this chasing, the fun continues. When the trespassing squirrel reaches its own "sanctuary", he would then turn around, face the pursuer...and the pursuer would then become pursued. It would be fun to watch this in action.

Picture of the Douglas squirrel by Franco Folini, licensed under GFDL

The Douglas's squirrel is listed as Least Concern (LR/lc), lowest risk. Does not qualify for a more at risk category. Widespread and abundant taxa are included in this category, on the IUCN Red List of Threatened Species

Namings for the Douglas

A young / baby of a Douglas is called a 'pup, kit or kitten'. The females are called 'doe' and males 'buck'. A Douglas group is called a 'dray or scurry'.