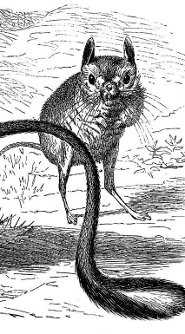 The great jerboa (Allactaga major) is not a sandy-colored rabbit, despite having very long ears. It’s also not related to a kangaroo, despite hopping on its hind legs. This curious creature is a rodent, meaning its teeth grow throughout its life. There are 25 species of jerboas living throughout Asia and Africa. The great jerboa is the largest. In the past, biologists thought jerboas were long-eared gerbils, but now they know that jerboas are their own family of rodents.

There is not much known about the great jerboa because of their nocturnal nature and their extreme timidity. It is known that they are not in danger of extinction. They have a wide range in the arid grasslands, steppes and deserts of the Ukraine, Uzbekistan, Turkmenistan and Russia. It is thought their predators include birds of prey, foxes and wolves.

Great jerboas possess the body of a gerbil with long ears, elongated five-toed hind legs and rabbit-like long ears. Their color is a sandy brown with a pale belly, chest and legs. Their eyes appear very large in comparison to the rest of the head. The eyes need to be so large in order for the great jerboas to navigate at night. The tail is much longer than the rest of the body. It is very slim with a white and black tuft at the tip.

Great jerboas spend their days sleeping underground in long burrows and chambers. They live in small family colonies. Underground is much cooler than the searing heat outside. They awake during sunset. They search far and wide to find seeds, roots, bulbs and insects. They obsessively comb through the sand with the toes of their forefeet to find food. Their huge ears make it easy to hear any danger. Great jerboas have to eat whatever they find instead of saving food for later.

The breeding season is in the spring around April and May. Female great jerboas have one litter a year and about 4 babies in each litter. When winter sets in, the great jerboas go into their burrows and hibernate in a group for five months. With luck, a great jerboa can live to be five years old.

The Great jerboa is listed as Least Concern (LR/lc), lowest risk. Does not qualify for a more at risk category. Widespread and abundant taxa are included in this category, on the IUCN Red List of Threatened Species

Some facts about the
Great jerboa