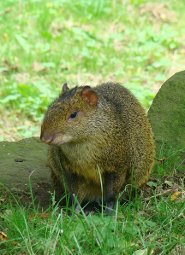 Measuring up to half a meter, or 20 inches, in length and weighing in at 3 kilograms, or 6.5lb, it is difficult to believe that Azara's agoutis (Dasyprocta azarae) are actually close relatives of mice and hamsters. However, it is absolutely true; they are members of the single largest mammalian order - the rodents.

Azara's agoutis are native to South America and are found in the rainforests of Argentina, Brazil and Paraguay. South America seems to be a veritable breeding ground for giant rodents, as the world's largest rodent, the capybara, is also found there. Even Azara's agouti is dwarfed by the 1.3 meter (4.3ft) long capybara.

The Azara's agouti's most prominent feature is perhaps its ears, which are large giving it good hearing, so that it can detect and evade predators. Its coloration aids it in this, with the speckled brown fur providing good camouflage against the surrounding foliage. Interestingly, Azara's agoutis have five fingers, like us, on their hands but only three fingers on their feet. Retention of the extra fingers on the forelimb provides extra dexterity for the processing of food. When Azara's agoutis eat they hold food in their forepaws while resting on their hindlimbs. Their shyness may be related to their solitary lifestyles but is also due to the fact that they are heavily preyed upon by many carnivorous species, including humans.

Azara's agoutis live in burrows or hollow tree trunks, which provide some protection from predators, particularly for mothers with young. Female Azara's agoutis gestate their young for ninety days, after which they give birth to up to 4 young per litter. In common with guinea pigs, but in contrast to mice, the young are precocial. This means they are relatively mature, with open eyes and a covering of fur, which aids temperature homeostasis.

Azara's agoutis are diurnal, that is to say they are active during the day, and they are herbivorous. Fascinatingly, they are thought to be only the only animal native to Brazil that can open a brazil nut. They are well adapted to this task with extremely sharp teeth and extraordinary strength. Azara's agoutis will also eat other nuts, fruit and seeds. This has earned them the name ‘jungle gardeners' because they spread seeds throughout the jungle aiding the dispersal of a plethora of plant species.

Perhaps the strangest thing about Azara's agouti is the name. This species is named after Felix de Azara (1742-1821). During his life he worked as a Spanish military officer, an engineer and a naturalist. The Azara's agouti is not the only species to be named after him; others include the Azara's ground mouse and Azara's spinetail. His work was held in high regard by the great Charles Darwin and an area of the moon is even named after him: Dorsum Azara.

Picture of the Azara's agouti by Abujoy, licensed under Creative Commons Attribution ShareAlike 2.5

The Azara's agouti is listed as Vulnerable (VU), considered to be facing a high risk of extinction in the wild, on the IUCN Red List of Threatened Species

Some facts about the
Azara's agouti