Bandicoots and bilbies pictures and facts 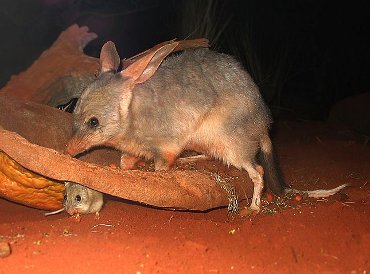 The unique animal order peramelemorphia includes bandicoots and bilbies. What makes this order so unique is that in addition to the animals in it being marsupials, they are omnivores. They exhibit a relationship to both the herbivorous and carnivorous marsupials to which they are less closely related.

To illustrate, they have fused second and third toes, otherwise known as syndactyly. Their connected toes can only be distinguished by the nails growing from each one. This is typically a characteristic of herbivorous marsupials such as opossums and kangaroos. At the same time, the way the peramelemoid's teeth grow suggests a relationship with carnivorous marsupials because they have multiple pairs of incisors, as opposed to the sole pair herbivorous marsupials have. This is known as being polyprotodont. The peramelemorph's teeth are, however, flatter and less pointed than a true carnivorous marsupial's. Another interesting fact that separates peramelemorphs from other marsupials is that the embryos grow a small placenta-like organ which attaches to the mother's uterus and provides the growing baby with nutrients.

Peramelemoids live in New Guinea and Australia. Scientists agree that there are at least two families, with eighteen species extant at present. Unfortunately, three species had become extinct by the mid 1900's because of an inadequate understanding of the animals and lack of protection of their habitat. The remaining species live in differing habitats. Some are prevalent in the New Guinea rainforest, or in the coastal forest of Australia, while others are adapted to living in arid conditions in the Australian interior.

Bandicoots and bilbies range in size from about 17 centimeters (6.5 inches) and 140 grams (5 ounces), about the size of a mouse, to 60 centimeters (2 feet) and around 3 kilograms (6 pounds), about the size of a small cat or rabbit. Their diet consists mainly of insects and plant material, which they obtain primarily by foraging. However, some are also known to eat rodents and lizards. They are not easily trapped, but they have been a component of the Aboriginal people's diet. Feral cats, dingoes and foxes also prey upon peramelemorphs. Feral cats can present a special challenge because they introduce toxoplasmosis to bandicoots, which can be fatal to them.

A significant species of bilby is the Greater Bilby (macrotis lagotis). It is significant in that it is the only surviving bilby species. The others have become extinct. It differs from a typical bandicoot because it has long ears akin to a rabbit. It is currently listed as vulnerable because conservation measures are being taken to ensure its protection. It is sometimes referred to as a long-eared bandicoot and is the largest of all peramelemoids.