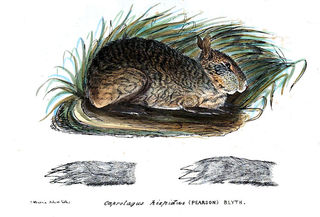 The Assam rabbit, hispid hare is listed as Endangered (EN), considered to be facing a very high risk of extinction in the wild, on the IUCN Red List of Threatened Species

Namings for the hispid hare

Facts about the hispid hare

The Hispid Hare (Caprolagus hispidus), is found in the tall grasslands of the Jaldapara Wildlife Sanctuary, West Bengal, and its sad tale is well told by Gopinathan Maheswaran. (Full text)

The spiny rabbit, separated from Lepus by Blyth in 1845 under the name of Caprolagus hispidus, is an inhabitant of See also:ASSAMAssam and the adjacent districts, and distinguished by its harsh, bristly fur and short ears and tail. (Full text)

The Hispid Hare (Caprolagus hispidus) is yet another habitat specialist that is facing the threat of elimination from the region.

Picture: Hispid Hare (36 Kb JPEG) The hispid hare is also called the "bristly rabbit" because it has (Full text)

USFWS Refuges on which the Hispid hare is reported.

The Hispid hare is just one example of habitat disturbance by tribals, who cannot be blamed as their livelihood is in danger with dams and roads being built across the country without their consent. (Full text)

Hispid hare is a near relative of the rabbit with body covered by hair, 47 cm long, like a pig. (Full text)

Hare Hispid Hare is one of the most endangered species of wildlife.