The Short, Happy Life of the Gray Slender Mouse Opossum 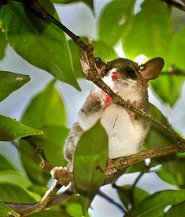 The gray slender mouse opossum (Marmosops incanus) is a little-known mammal that lives in the lower coastal region of Brazil. An interesting characteristic of the species is its very brief lifespan. Females typically live approximately a year and a half, undergoing only one reproductive cycle. Males live just a year, dying shortly after they mate.

Grayish-brown in primary color with a creamy underside, the wiry creature has a long, thin tail (38-63 centimeters/15-25 inches) that's longer than its body (25-43 centimeters/10-17 inches). It weighs no more than 170 grams/6 ounces; males are substantially longer and heavier than females. The animal is conspicuous for its disproportionately large ears, more than 2.5 centimeters/1 inch in length. The pelage (hair, or fur) is soft and long at first; it becomes short by the time the animal reaches adulthood. As with other opossum species, the rings around the eyes are prominent.

This species of opossum is rather versatile. It thrives in rainforest, deciduous forest and scrub forest environs. It's found most commonly in Brazil’s warm, humid coastal zone. It also can live in the higher, drier eastern mountain forests and even on the country’s inland plateau. The pelage of opossums living in coastal areas is notably darker than that of their inland cousins. In at least one population, a second breeding period is known to occur in spring. Basically, the young opossums are born fatherless. The mothers, generally more active than males, survive the fathers by only a few months. This is especially interesting because newborn grey slender mouse opossums are markedly altricial. This means they are frail and very vulnerable to predators and conditions, as contrasted with more immediately independent (precocial) young animals of other species.

The gray slender mouse opossum is diversely equipped and is at home both on the ground (terrestrial) and in trees (arboreal). It is an insect feeder. Its main prey are the Coleoptera and Orthoptera insect orders.

The animal’s scientific name was Marmosa incana until recent years; previously, Marmosops was considered part of the Marmosa genus.

The Gray slender mouse opossum is listed as Near Threatened (LR/nt), is close to qualifying for or is likely to qualify for a threatened category in the near future, on the IUCN Red List of Threatened Species

A young / baby of a gray slender mouse opossum is called a 'joey'. The females are called 'jill' and males 'jack'.